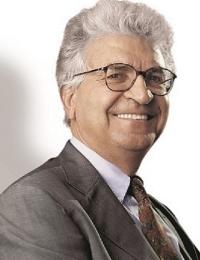 Edmond Alphandéry, former French Minister of the Economy and Chairman of the Task Force on Carbon Pricing, gave a long explanation of his vision of the place and importance of carbon pricing in the ecological transition, and highlighted the decisiveness of this measure in order to achieve the objective of carbon neutrality, within the framework of the Paris agreement.

Carbon pricing: an essential tool for the ecological transition

Minister Alphandery began by reminding us of the scale of the challenge posed by global warming and the complexity of the issues at stake : given that we emit 40 billion tons of CO2 each year, he explained that if we reasonably assume that the price of a ton of CO2 should be set at around 100€ (according to the main evaluations), then a carbon pricing system would cost €4,000 billion each year, which amounts to Germany’s Gross National Product (GNP).

In this context, the former minister sees carbon pricing as central to the fight against global warming. His explanation is simple: when carbon has a price, all economic agents (households, companies, the State) are encouraged to reduce their emissions, or even to stop them or to find alternatives, in order to reduce their expenses.
The speaker specified that there are two solutions currently applicable and applied in order to put a price on carbon. The first is a carbon tax, which is simple and effective, but politically difficult to implement and whose adjustment is complex. The second is the introduction of a carbon market, where emission permits are issued according to the total volume of emissions desired. Permits are bought by market participants in proportion of what they emit, and their price is defined by supply and demand.
According to the chairman of the Task Force on Carbon Pricing, the tautological advantage of the carbon market is that it is a market, and that it therefore encourages innovation and the adoption of virtuous behaviour by agents in order to resell their permits (see the example of Tesla in the United States). However, it has the disadvantage of being characterised by a high volatility of carbon pricing.
It is this last reason that prompted the former minister to chair the Task Force on Carbon Pricing in order to promote among decision-makers a targeting of the price of carbon rather than volumes, as is currently the case. On the European carbon market, for example, he said that this would give stability to a carbon price that had collapsed during the subprime crisis, and also increase visibility.

Against the threat of climate change, China must adopt and extend carbon pricing

Edmond Alphandéry then spoke about the role of China, whose place he considered to be unavoidable regarding these issues. The country’s emissions are indeed higher than those of the United States and Europe combined. In this respect, he pointed out that the Chinese government is aware of the importance of the issues at stake and has already promoted a number of ecological transition measures. For instance, he stated that there is already a carbon pricing system in China, even if the price remains largely insufficient for now and is limited to the energy sector.
The former minister also stated that, in his view, there is a real Chinese will to carry out reforms. He particularly welcomed the initiatives and discussions that are taking place between various European and Chinese personalities, discussions in which he himself took part, in order to defend a convergence of the carbon prices of the two powers.
For Edmond Alphandéry, if such a reform was promoted, it would be no less than a revolution in the fight against global warming.

In conclusion, the panelist made a proposal to the Chinese authorities regarding their major strategic programme that is the BRI. As the government increases energy investments, especially aimed at thermal power plants, Edmond Alphandéry would consider it relevant and effective to introduce an internal carbon price in the companies and industries financed by Chinese funds. This would simulate a carbon price and thus encourage decarbonisation, while sending a strong message to the international community by underlining the importance that China attaches to reducing greenhouse gas emissions.
Edmond Alphandéry said he would be ready to support such an initiative immediately.

Alphandery was one of the main speakers at the Bridge Tank forum on EU-China cooperation post-Covid-19.
He participated in a panel moderated by Philippe Coste, former French ambassador, on greening investment in the European Union (EU) and China, and on the challenges of the Belt & Road Initiative (BRI). The forum took place at the Palais Brongniart in Paris on 15 October 2020. Other speakers in this session were Pierre-Noël Giraud, Professor of Economics at the Ecole des Mines de Paris, Djellil Bouzidi, member of the Haute Autorité de la Statistique and of the Bridge Tank’s Board, and Song Luzheng from Fudan University.