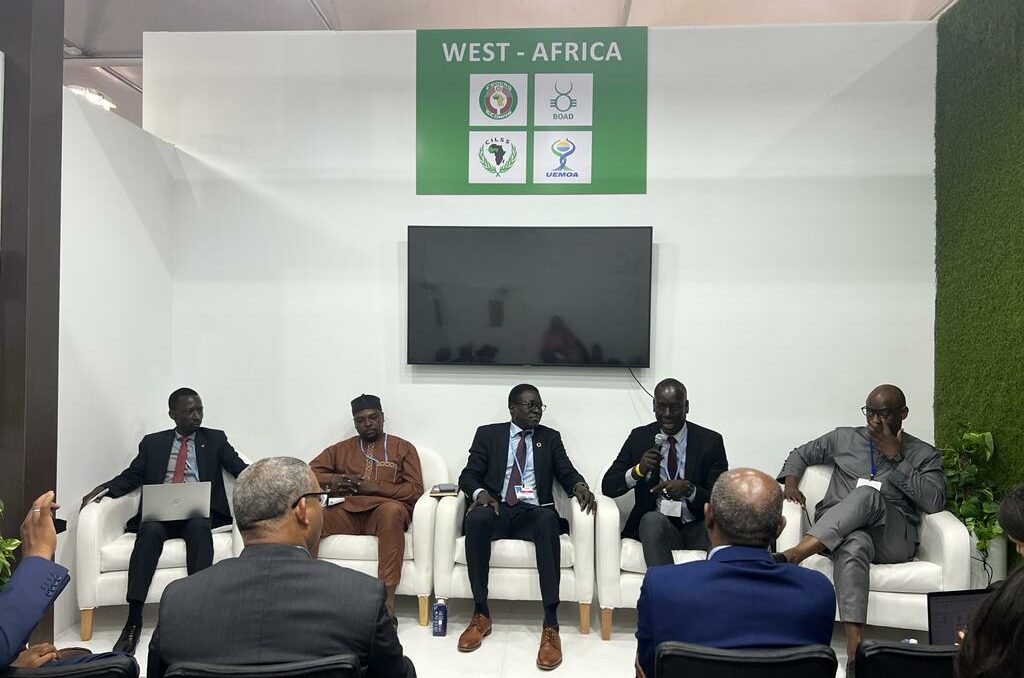 The fear of ending COP 27 without any significant advances was looming over Sharm el-Sheikh, Egypt, in the dying hours of this year’s United Nations Climate Change Conference.

But after a final negotiations marathon between the parties, a deal was eventually struck.

The agreement which concluded two weeks of discussions and negotiations in the Egyptian coastal city offered an important step forward in the contentious question of loss and damage. Parties agreed to establish a loss and damage fund which will help support those countries most impacted by climate change. The fund will provide financial relief to respond to the catastrophic effects of the environmental crisis, like droughts, heatwaves, floods, or cyclones.

While encouraging as a signal of international solidarity in response to environmental catastrophes, the final agreement fell short of many COP 27 participants’ expectations and hopes. In an interview for TV5 Monde, Hakima El Haite, board member of The Bridge Tank, expressed her disappointment  with the lack of advances at COP 27:

“It is true that we have taken a step forward by agreeing on the creation of a mechanism that will still require time. The more we mitigate CO2 emissions and the more we reduce CO2 concentrations, the less we will need to adapt and the less money we will need to repair the damages caused by natural disasters. And so we have to act and it’s not up to the vulnerable countries to act, it’s the emitting countries that emit 80% of the emissions that have to provide 80% of the solutions in their own countries.” 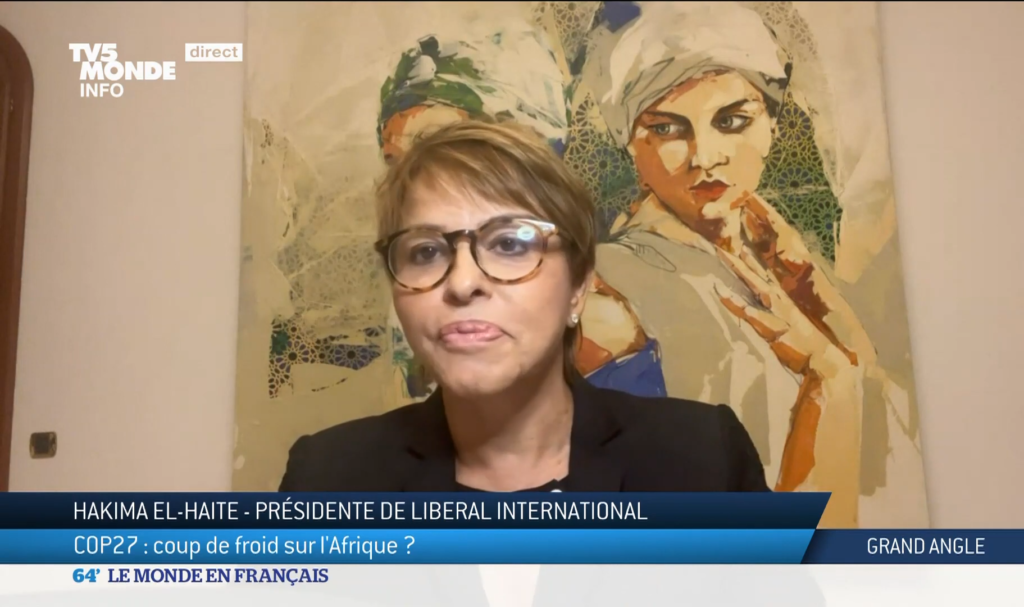 This opinion was shared by many, particularly in the Global South and West Africa, a region which faces some of the most dire effects of climate change and which had come with strong demands and expectations to COP 27, the African COP.

A Strong and Proactive West African Presence at COP 27

Representatives from West African countries had arrived at COP 27 with the hope of seeing strong decisions being made to relieve the environmental pressure affecting the continent. Before the beginning of COP 27, the Economic Community of West African States (ECOWAS) had shared some of the points it considered crucial to successful climate change negotiations:

Intent on making the sub-region’s voice heard at COP 27, West African institutions joined forces in Sharm el-Sheikh at the West Africa Pavilion. This pavilion was co-piloted by ECOWAS and the West African Development Bank (WADB), in partnership with the West African Economic and Monetary Union (WAEMU) and the Permanent Interstate Committee for Drought Control in the Sahel (CILSS).

“The pavilion expresses the willingness of regional institutions to strengthen their cooperation around the common challenge of climate change. The approach aims to improve the coordination and effectiveness of the collective response for the benefit of the region’s populations,” ECOWAS communicated prior to the conference. 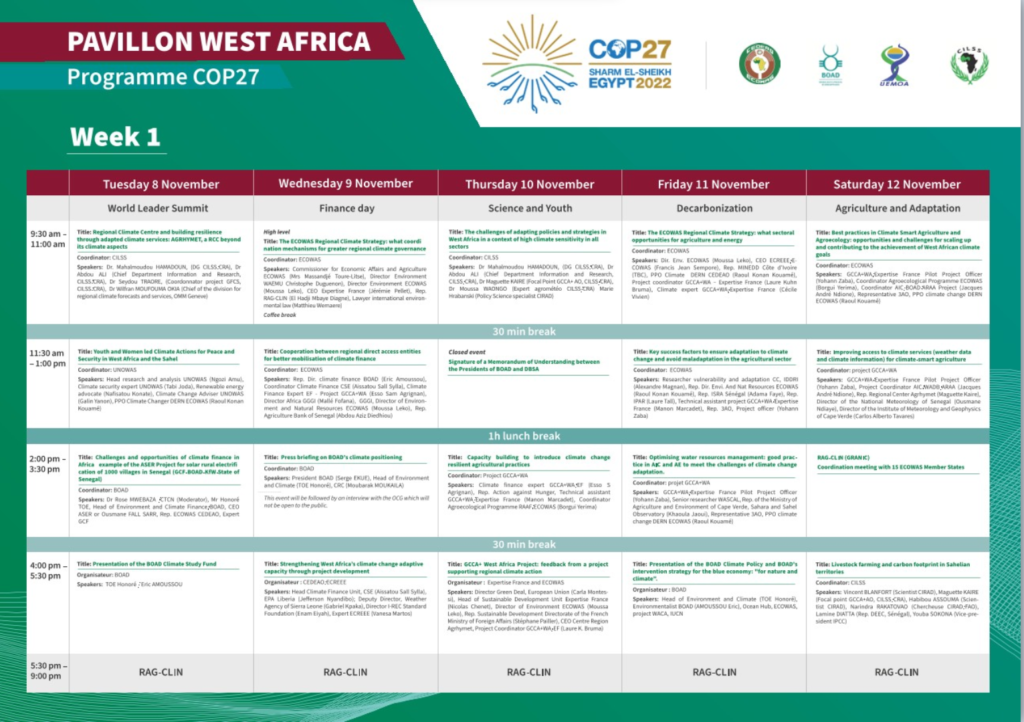 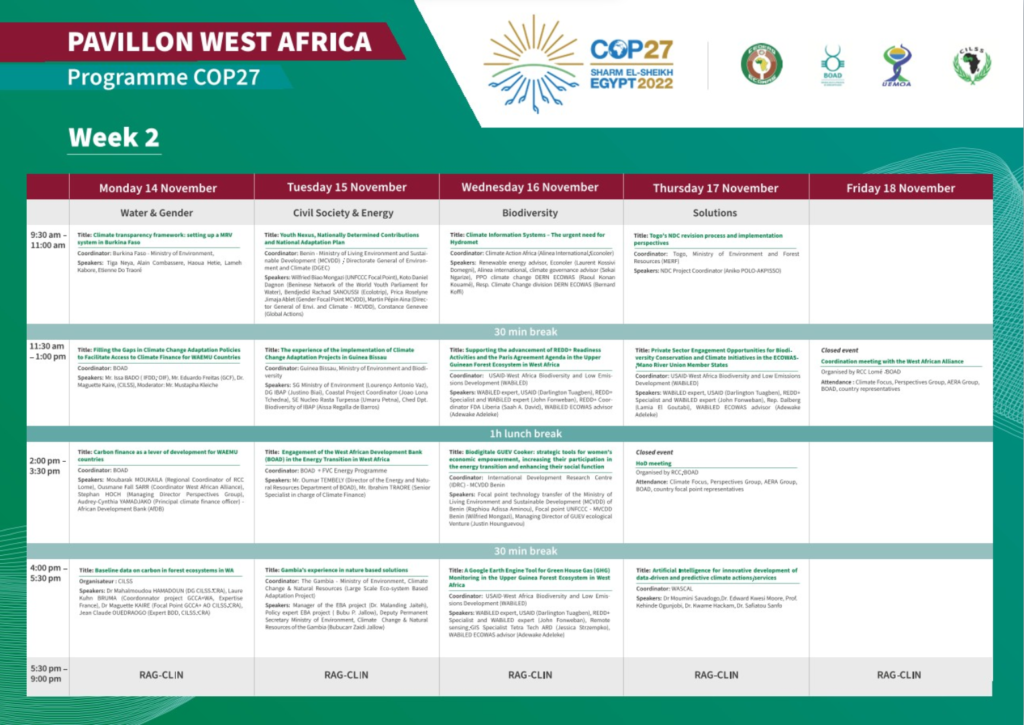 The ECOWAS Commission made use of its presence at the West Africa Pavilion to organize side events introducing the union’s Regional Climate Strategy. These included a session on November 9th on coordination mechanisms for greater regional climate governance and another one on November 11th on the sectoral opportunities the strategy offers for agriculture and energy.

The West African Development Bank (WADB) was also very active on the Pavilion. On November 9th, Serge Ekué, President of the WADB, gave a press briefing on the WADB’s climate positioning. This was an opportunity to discuss the WADB’s Djoliba 2021-2025 Strategic Development Plan, which allocates 25% of the bank’s total commitments to climate finance in order to support member states in the financing of their Nationally Determined Contributions (NDC) and the achievement of the Sustainable Development Goals (SDG). Through its president, the WADB expressed its wish to be a catalyser of resilience and adaptation to climate change and a facilitator of sustainable and stable growth.

Capitalizing on the centrality of climate finance at this year’s climate change conference, the WADB organised a number of events on the matter, including a panel on “Challenges and opportunities of climate finance in Africa,” and two sessions on November 14th, “Filling the Gaps in Climate Change Adaptation Policies to Facilitate Access to Climate Finance for WAEMU Countries” and “Carbon finance as a lever of development for WAEMU countries,” with the participation of the West African Alliance On Carbon Market and Climate Finance. 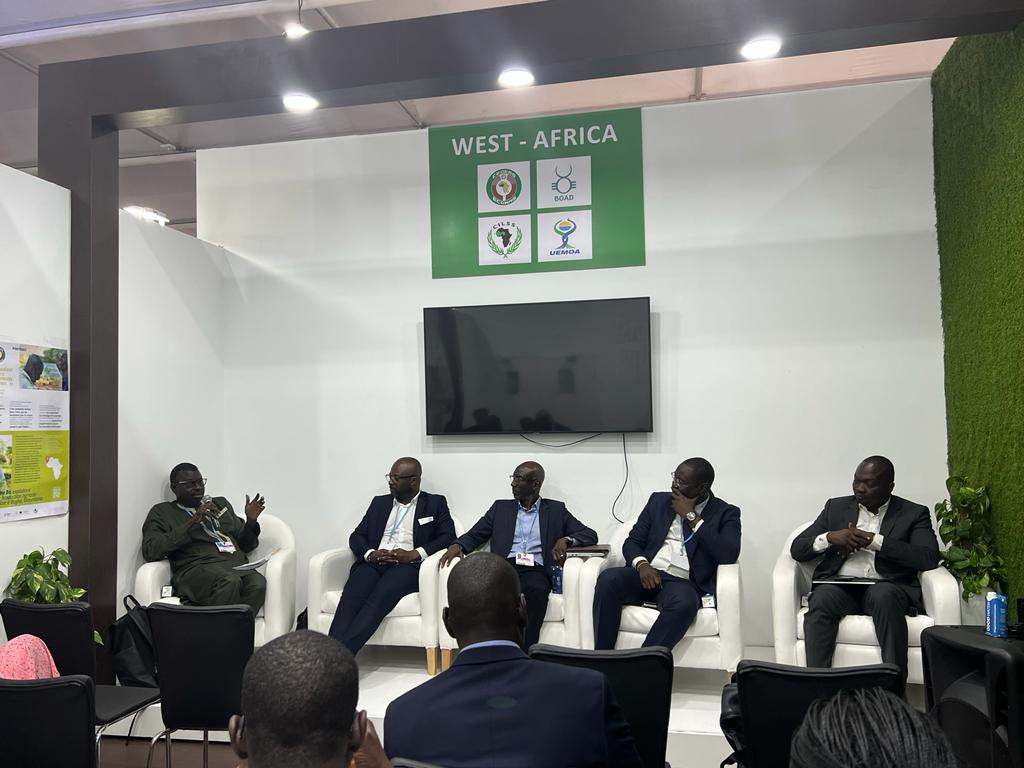 The WADB also took part in side-events organised by other institutions in Sharm el Sheikh, including one by the Green Climate Fund on the Great Green Wall for the Sahara and Sahel.

This importance of climate finance on this year’s agenda at COP 27 also mobilised The Bridge Tank, which co-organised a side event with Liberal International on North-South dynamics in climate finance. The panel discussion “Towards a balanced, empowered, North-South blended climate finance for mitigation and adaptation” included prominent figures and institutions from West Africa and provided an additional building bloc to the pursuit of a more effective and balanced climate finance.

Despite these many efforts and calls for bold measures, COP 27’s final agreement comes as a disappointing conclusion to two weeks of active involvement on the ground from West African institutions and countries. The wish to make COP 27, the African COP, an important milestone in the fight against climate change and the establishment of climate finance mechanisms ensuring the continent’s preservation has been left unfulfilled, to the frustration of many.