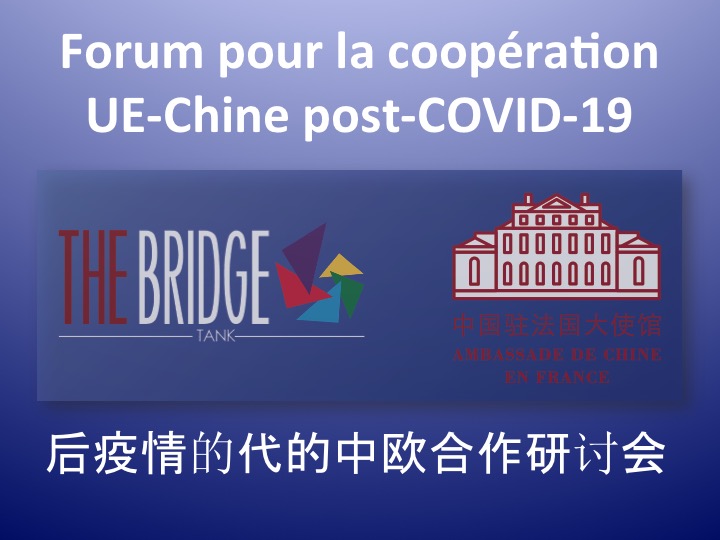 The first part of our Forum, co-organised by The Bridge Tank and the Chinese Embassy, brought together 4 former ministers, 5 former ambassadors and a total of 30 experts on 15 October at the Palais Brongniart in Paris, as well as 150 registrants from 3 continents and more than 15 cities, for informed and precise exchanges on economic, industrial, social and cultural issues concerning the EU-China relationship.

It was opened by Joël Ruet, Irina Bokova, board member of The Bridge Tank who clarified the expectations for the 6 panels of the Hybrid Forum, and by Ambassador Sylvie Bermann who gave her views and suggestions on the issues to be discussed between the EU and China.

These exchanges will be followed by free contributions via an open online Forum, whose recommendations will provide the material for a “white paper” which will be presented by The Bridge Tank at a restitution conference in the presence of the Chinese Ambassador to France and French and European public figures.

Our work dealt with diplomatic issues, culture, human exchanges, economics and industry, focusing on common challenges between the European Union and China: energy transitions, economic transitions – in particular the advent of new industrial models, global public goods. About 80% of the experts were French or European and 20% Chinese, all independent practitioners.

This forum takes place at an important moment when the European Union and China have started negotiations towards an investment agreement.

The reports of the sessions are available below, after the photo gallery.

What globalisation after Covid-19?

Economic recovery, energy and ecological transitions in China and Europe

What vision for an innovative, plural and inclusive global governance?