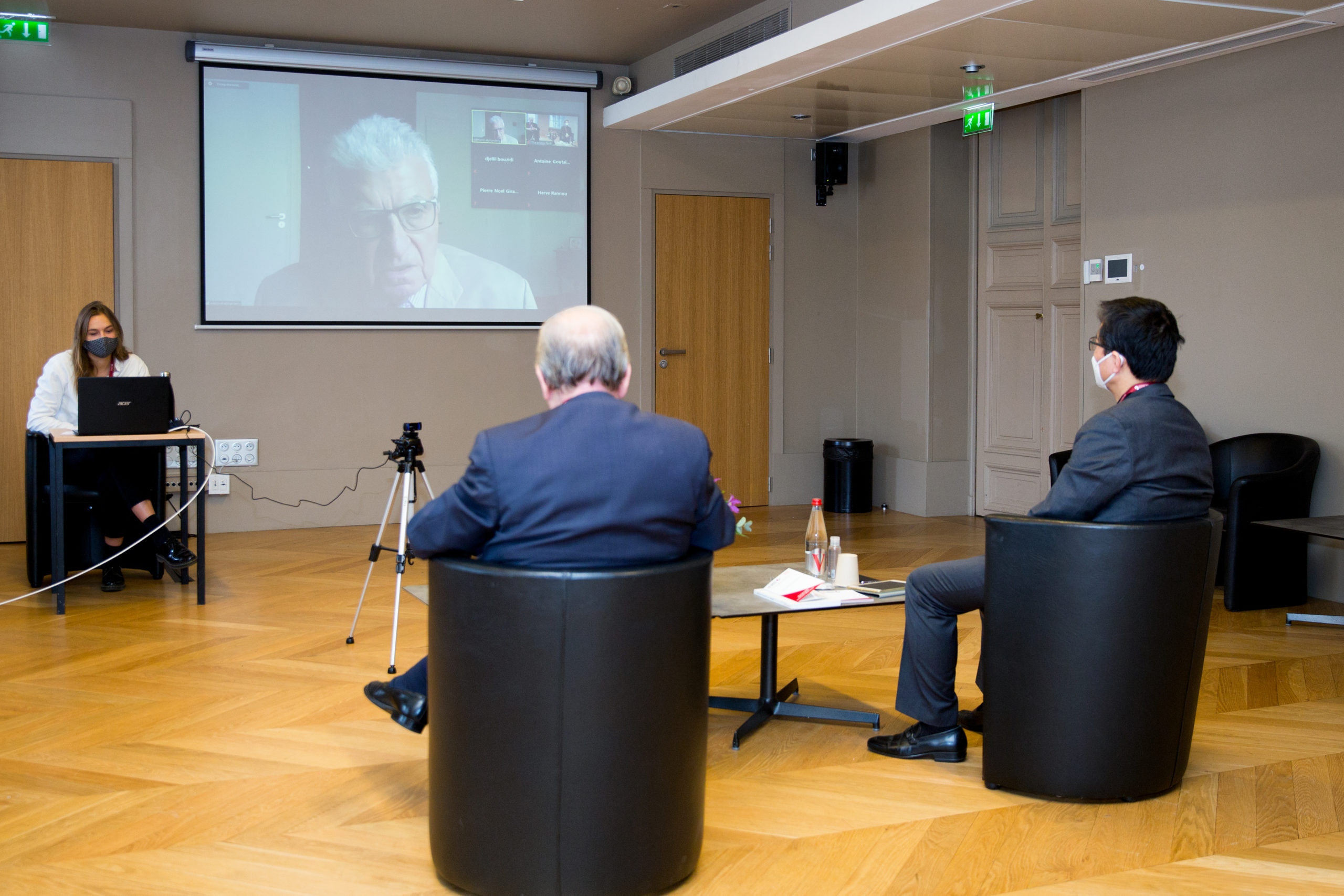 The news on sustainable development is dominated by the initiative announced at the 75th anniversary of the UN by Xi Jinping to be carbon neutral by 2060. The AIIB has decided to stop financing coal. The Chinese government aims to pass the carbon emission peak before 2030 but 80% of primary energy in China is carbon-based, representing 27% of global GHG emissions. In light of these recent developments, Edmond Alphandéry, Pierre-Noël Giraud, Song Luzheng and Djellil Bouzidi discussed the economic instruments of a possible EU-China cooperation in this field in a panel chaired by our board member Philippe Coste.

Philippe Coste recalled that for the time being, many coal-fired power plant projects are being built in China. However, the combination of China’s desire to pass the carbon emission peak before 2030 and the launch by Europe of its green plan in connection with the recovery plan provides a very good basis for cooperation, provided that the ways of effectively exploiting it are identified.

Edmond Alphandéry pushed for a carbon price tool. In Europe, a coalition of finance ministers has been set up in this direction: it is a market-based, decentralised solution that encourages the production of non-carbon energies. In Europe, 45% of emissions are subject to the ETS market. This mechanism retains the problem of volatility. To maintain its power as a price signal, the price of emission allowances must be predictable and stable over the long term, and Edmond Alphandery has set up a task force to convince the European authorities to target carbon prices rather than emission volumes.

China is absolutely key in the fight against climate change. It has realised this and set up a carbon market. Within the International Finance Forum, we are leading a joint initiative between leading Chinese and European figures towards a common strategy for a convergent carbon price. The idea is spreading in China.

Pierre-Noël Giraud also insists on the role of politics and civil society, arguing that banks have no interest in getting involved because of the liquidity of financial markets. The failure of green bonds is also obvious as they only yield 8 basis points.

Djellil Bouzidi fully shares this view on green bonds. Zero and negative rates are the enemy. The investment costs do not vary and the energy intensity of companies issuing green bonds is generally worse afterwards. The state is very important, the fight against GHG emissions is a state affair! Government bonds indexed to environmental performance (GHG emissions, deforestation, composite indices) would force governments to meet their commitments, creating a new asset class: sustainability-linked bonds. Private accounting is another lever for private companies at two levels.

The debate mentioned the role of Africa: Tomorrow the major emitters will be South Asia and Africa. By 2050, China will be back to 1 billion inhabitants as will the West. Africa will have 2.4 billion inhabitants and South Asia 2.5 billion. In South Asia, and even less so in Africa, there will not be strong enough states to drive investment. A tripartite partnership in Africa must be set up to make up for the shortcomings of the states. The Chinese and the West could come to an agreement. Africa must become a laboratory for green energy! Investments in Africa should be entirely decarbonised even if, in practice, this adds difficulties. China, in the framework of BIS, could put a price on carbon in its overseas investments, encouraging its partners to do the same. The financial partners – the banks – have clients who have already pushed them out of inaction. For the proposed instruments: the market structure of finance neutralises the power of these instruments.

Download the minutes of the debate in french: Greening Investment Session