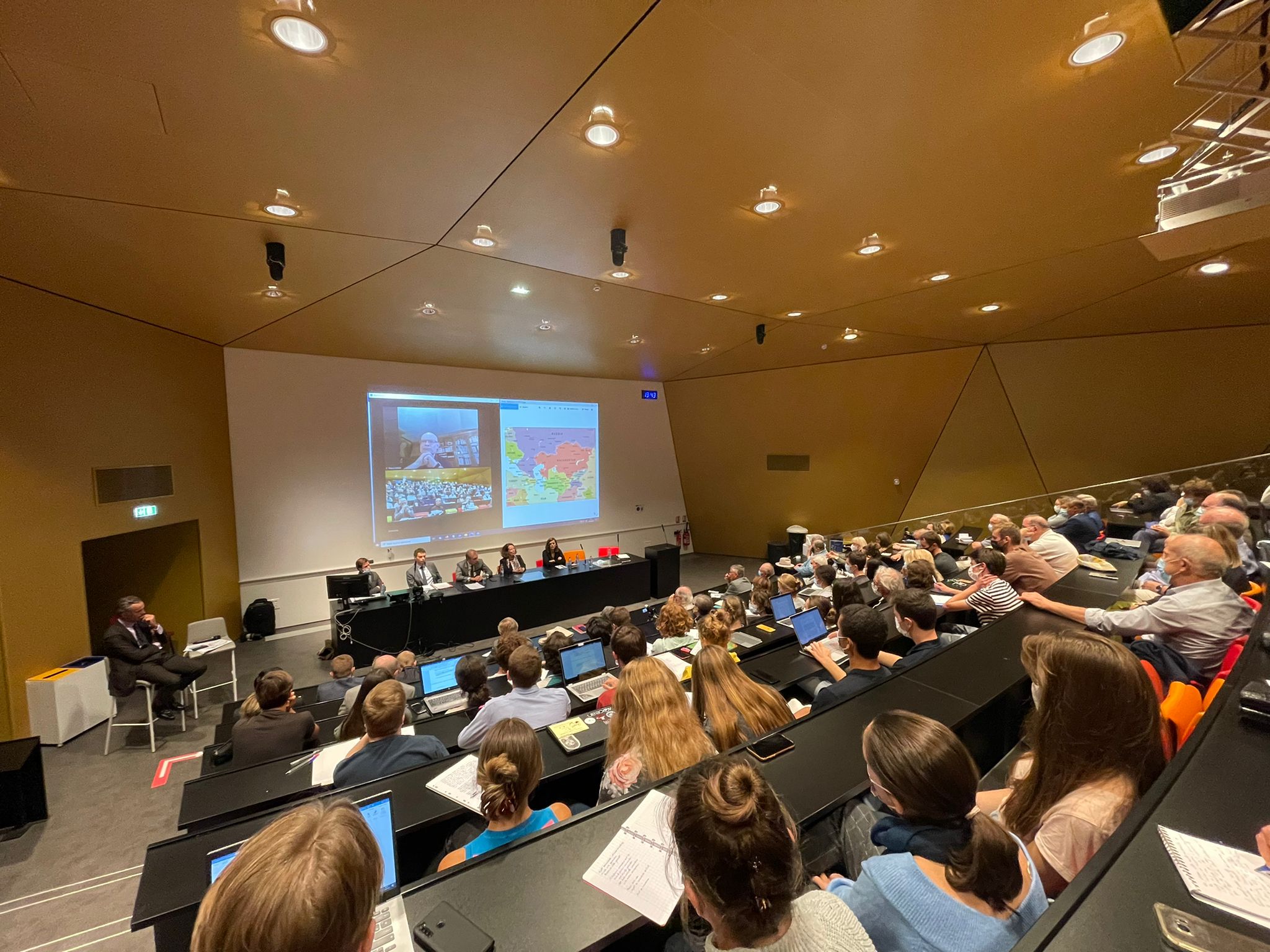 On 17 September, a conference on Central Asia “Between Russian and Chinese covetousness, what place for the European Union?” was held at Sciences Po Strasbourg with the support of The Bridge Tank, the Think Tank Paris-Berlin-Moscow, Sciences Po Forum and the Alumni Association of Sciences Po Strasbourg. The aim of this conference was to discuss Central Asia and more specifically to study the Russian, Chinese and European influences in the five Central Asian countries of the former USSR: Kazakhstan, Kyrgyzstan, Uzbekistan, Tajikistan and Turkmenistan, thanks to the expertise and experience of practitioners of international relations and the region. 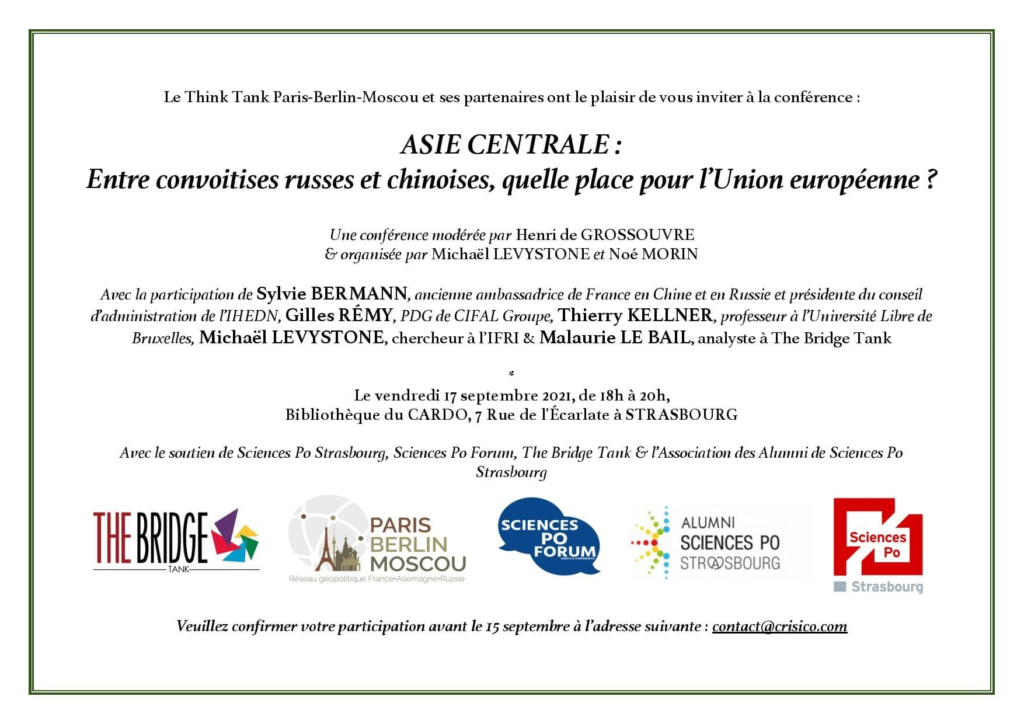 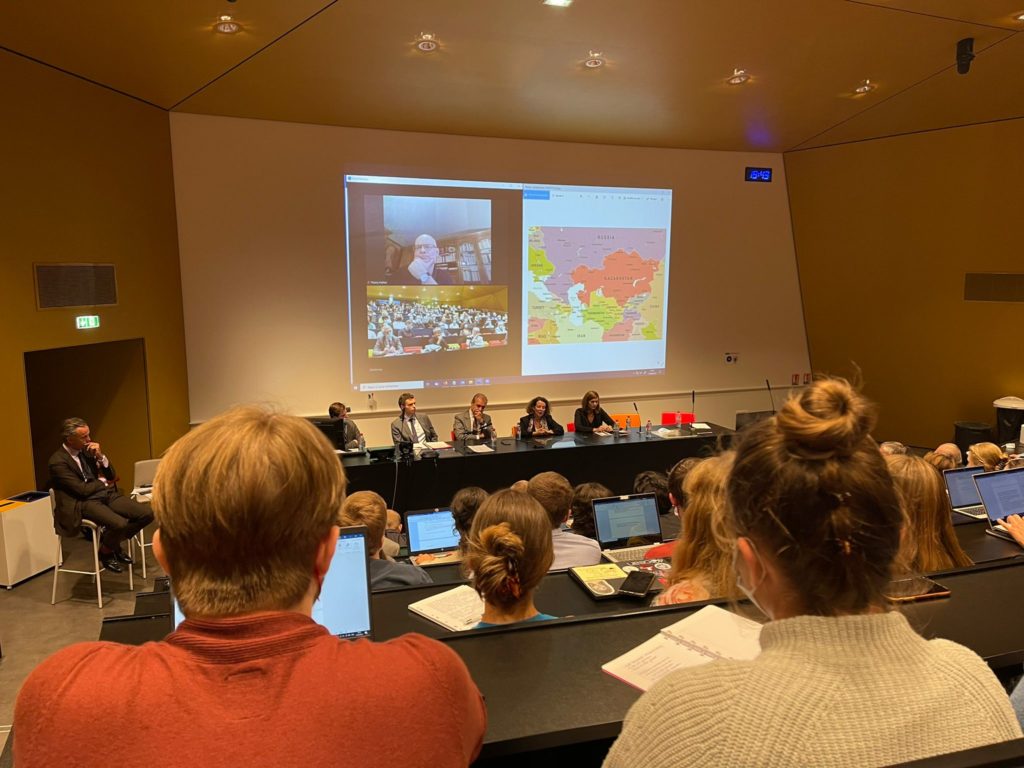 Among the speakers were Mrs Sylvie Bermann, former French Ambassador to China and Russia and President of the IHEDN Board of Directors, Mr Gilles Rémy, Director of the CIFAL Group, Mr Thierry Kellner, Professor at the Université Libre de Bruxelles and China specialist, Mr Michaël Levystone, Researcher at the Russia/NEI Centre of IFRI and Mrs Malaurie Le Bail from The Bridge Tank.

This event brought together around 150 people: Mr Ivan Soltanovsky, Ambassador, Permanent Representative to the Council of Europe, Mr Anuarbek Akhmetov, Consul General of the Republic of Kazakhstan in Strasbourg, Mr François Loos, Former French Minister, Mr Pierre Andrieu, Former French Ambassador, various experts who have worked in the region and many students. 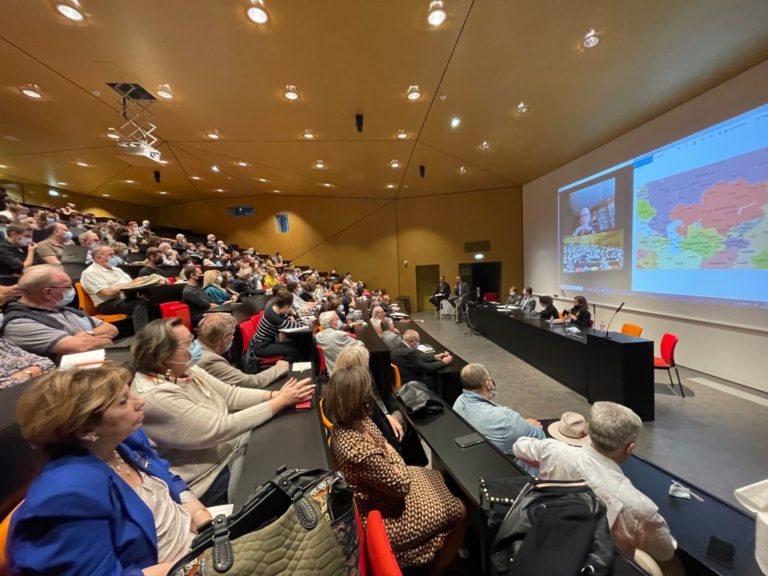 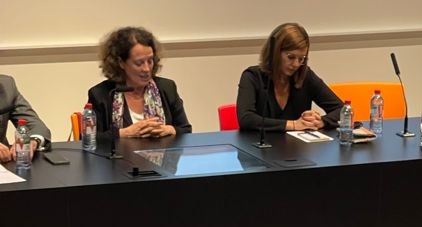 The Bridge Tank, co-organiser of the event, was represented by analyst Malaurie Le Bail. She deciphered the climate and environmental situation of the region through a scientific reading of the Intended Nationally Determined Contributions (IDNC) of Kazakhstan and Tajikistan a few weeks before the COP26. According to Malaurie Le Bail, many analyses, both in academic and institutional literature and in the media, highlight Kazakhstan’s climate leadership in the region. However, when comparing the INDC of Kazakhstan and Tajikistan, their greenhouse gas reduction targets are almost identical. Her presentation put Kazakhstan’s leadership into perspective and highlighted the way in which the climate ambitions of states should be studied according to the notion of “differentiated common responsibilities”. Malaurie Le Bail suggested two recommendations:

Finally, Malaurie Le Bail concluded her intervention by presenting a vision of The Bridge Tank on new Silk Roads (BRI – Belt and Road Initiative). The BRI is a Chinese-Chinese solution to a Chinese-Chinese problem and responds to low domestic market demand and high exports of goods, which caused the accumulation of Chinese currency in the years 2000-2010. The BRIs are therefore not an initiative to promote investment but to develop Chinese loans abroad that generate trans-border economic activity. The idea for China, especially for Chinese companies, is to create infrastructure and activities abroad financed by debt to rebalance the domestic economic situation and to develop infrastructure in the western provinces of the country. The Bridge Tank argues for a reading of the BRIs from within China, rather than from simply a regional and global influence perspective. From a Central Asian perspective, the BRIs allow these countries to benefit from the infrastructure and technologies developed and used in this project, but also to integrate a global market and to be at the heart of a strong geopolitical system.