Together with its Chinese partners, the China International Publishing Group and the China Institute for Innovation & Development Strategy, as well as the Prospective & Innovation Foundation, the Bridge Tank co-organized on March 8 a hybrid Forum on the sidelines of the Two Sessions.

On this occasion, Joël Ruet spoke alongside Wei Jianguo, former vice-minister of Commerce in China and vice-chairman of the China Center for International Economic Exchanges, Cai Jiming, deputy at the People’s National Assembly and director of the Central Committee of the China Association for Promoting Democracy, and Zhang Yuyan, member of the 13th National Committee of the Chinese People’s Political Consultative Conference and director of the Institute of World Economics and Politics.

Jean-Pierre Raffarin, former Prime Minister of France, opened this webinar alongside four Chinese vice-ministers and the deputy speaker of the House of Representative of Argentina. For almost three hours, representatives of more than ten countries, ranging from Russia to India, from Brazil to South Africa, explored new avenues of thoughts, in particular in favor of multilateral cooperation, global economic recovery supported by innovation and reform of global economic governance. The role of international think tanks in building platforms for dialogue was highlighted, and presented as an essential strength in building a community on a humanity scale.

Opening of the Forum by Jean-Pierre Raffarin: against the temptation of isolationism, an international cooperation based on innovation 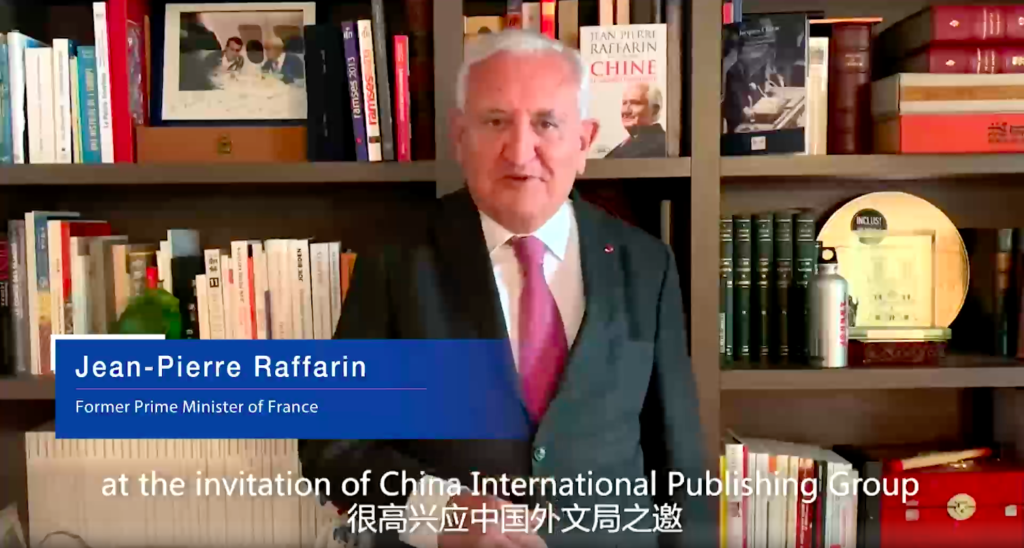 In his remarks, the former French Prime Minister said that sharing of experiences and mutual understanding were essential to achieve peaceful development, a common goal for all countries. As a global crisis exacerbates the need for a coordinated response to global challenges, he stressed the dangers of a temptation to unilateralism and protectionism. Emphasizing the role of innovation, he argued that each country should actively conduct international cooperation while safeguarding its own sovereignty. He mentioned in particular the fight against climate change, referring to the joint efforts of France and China, a strong signal in favor of a global consensus for green development.

From crisis to opportunity for renewal, according to Chinese speakers Wei Jianguo, Zhang Yuyan and Cai Jiming 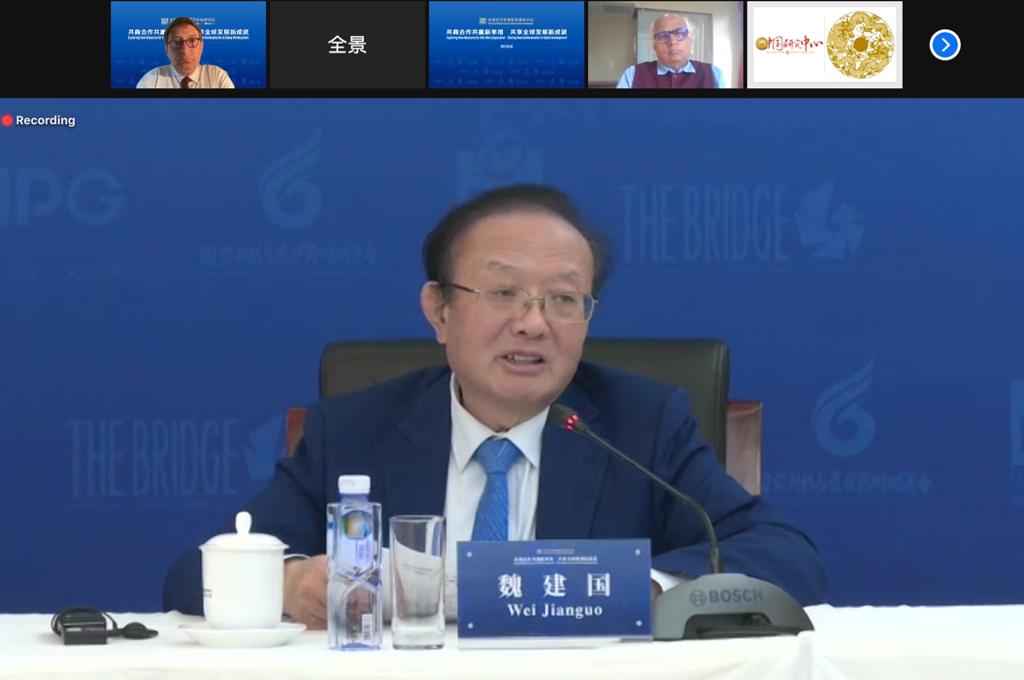 Former vice-minister of Commerce Wei Jianguo said China’s “dual circulation”, a pillar of the 14th Five-Year Plan launched at the same time, will bring new opportunities for global economic development. According to him, beyond the crisis it is going through, the world is entering a new era of globalization, where China must play a crucial role.

But experts have set it against a less optimistic scenario, warning of current systemic risks threatening the global economy, such as inflation, the symptoms of which – sharply rising commodity prices – are already visible. Inflation and climate change therefore emerged as two challenges of common interest to be tackled together.

Zhang Yuyan called for renewed international cooperation, which involves working together on the issue of global governance. Indeed, discussions remain to be conducted, and this responsibility falls to the great world powers, which must find the right balance between strategic autonomy and common interests.

Cai Jiming emphasized the importance of building a fair and sustainable world trading system, based on the notion of comparative interest in the international division of labor, firmly opposing isolationist tendencies that threaten the balance of world trade. 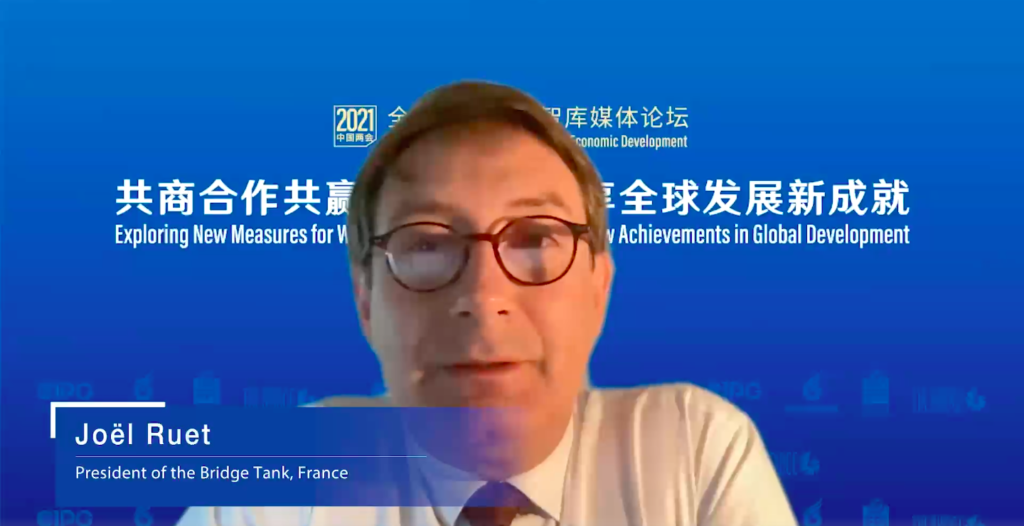 Joël Ruet, chairman of the Bridge Tank, said China must adopt more multilateral ways to clarify its position in the security issue and create a stable external environment. Speakers also agreed on the idea that China should play a role commensurate with its economic weight in global governance.

He referred to the pre-investment Agreement concluded between China and the EU, symbol of the opportunities that can emerge from a crisis, while warning of two priorities that should not be overlooked. Indeed, he targeted two areas where Sino-European cooperation is fundamental : the environment, where the ambitious words of the heads of state must be implemented through acts in the perspective of the COP26, and industrial cooperation, that the European and Chinese industries and businesses see as very promising.

The Two Sessions designates the two annual plenary meetings of the National People’s Congress and the National Committee of the Chinese People’s Political Consultative Conference. After a year of pandemic which had postponed this meeting in May 2020, the Chinese leaders were keen this year to launch it on March 5, as if to embody the exemplary resilience of the country and the regained normality of the regime’s institutions. Plus, it is marked by the launch of the 14th Five-Year Plan 2021-2025 and the 100 years anniversary of the Chinese Communist Party.

Among the highlights of this event, Prime Minister Li Keqiang has set a growth target of 6% for 2021. This moderate figure shows that the priority will be less focused on an attractive GDP – the IMF is banking on an 8% recovery – than on stable growth in a context of uncertainty, and on three pillars: “reform, innovation, and high quality development”. Also, the budget allocated to research and development will increase by more than 7% per year over the next five years, to achieve breakthroughs in future technologies and allow China to gain strategic autonomy. Another priority of the regime is to upgrade the supply chain and to promote domestic consumption, especially in the automotive and household appliances sector.

In fact, both the Two Sessions and the 14th Five-Year Plan have as a common thread the development paradigm of “dual circulation”. This notion denotes a two-pronged development strategy that requires both internal and external market support to stimulate long-term consumption patterns. The domestic cycle is particularly emphasized while it is complemented by an international cycle, with foreign trade and investments abroad. This objective of betting on the huge Chinese domestic market is rooted in a desire to hedge against external shocks, in the context of rising diplomatic tensions and instability in the world economy.

Li Keqiang also stopped on the environmental issue: he called for the promotion of the greening of lifestyles and production. For example, one of the targets for 2021 is to achieve a rate of 70% for the use of clean energy for heating. The 14th Plan calls for China to reduce its energy consumption per unit of GDP by 13.5% and CO2 emissions by 18%. Yet the experts say that the objectives mentioned do not represent a real acceleration to achieve the carbon neutrality expected in 2060, for lack of concrete means. For example, the Double Assembly as well as the 14th Five-Year Plan introduced the idea of ​​a “cap on CO2 emissions”, without actually setting one. While it is encouraging that a component dealing with climate change is for the first time adopted in a national-level plan, these initial environmental indications are therefore often perceived as ambiguous, even disappointing.