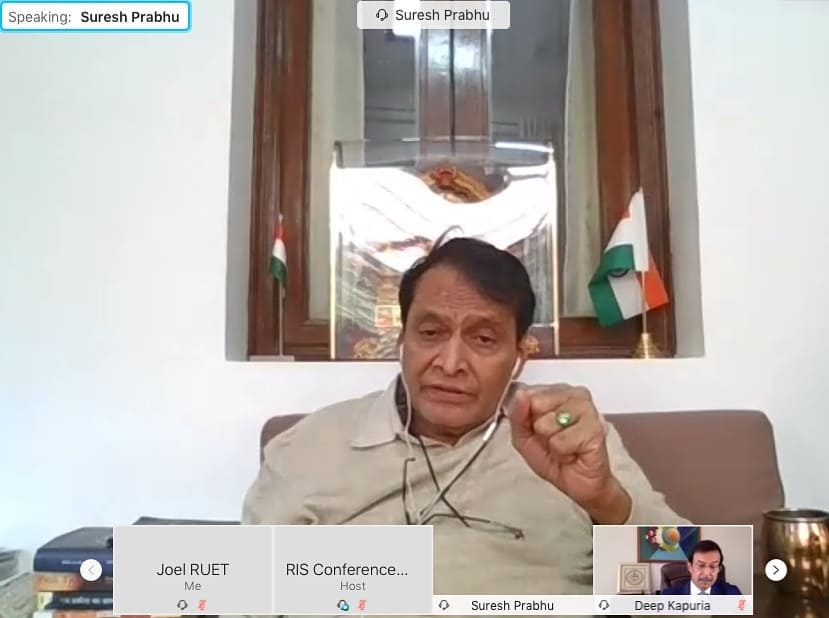 Suresh Prabhu, India’s G7 and G20 Sherpa and member of the Bridge Tank’s board, Nicolas Pinaud, OECD G20 Sherpa, Joël Ruet, Deep Kapuria, co-chairman of the B20 Task Force on Digital Economy and Industry 4.0 and chairman of the CII Regional Committee on Central Europe, took part in the webinar organised by the Riyadh Summit Declaration. The speakers discussed the roadmap for the G20 beyond the Riyadh G20 Summit, which took place earlier in 2020, during this workshop on the 26th of November 2020. Given that India will take over the G20 presidency after Italy, setting out guidelines for the mitigation of the impacts of COVID-19 and the handling of the economic recovery this early is key to efficiency.

Nicolas Pinaud’s intervention was entitled “Emerging from the pandemic: opportunities to address structural challenges and build back better”. He argued that the G20 Action Plan remained a living document that had to be used to set out the G20’s response and its commitment to drive forward international economic cooperation and to reduce inequalities, as well as the Debt Service Suspension. He also highlighted the need to acknowledge that universal, secure, and affordable connectivity, is a fundamental enabler for the digital economy and a global and consensus-based solution to the tax challenges of digitalisation should be encouraged. He underlined the G20’s support for tackling pressing environmental challenges, especially with its intention to play a leading role in the implementation of the 2030 Agenda for Sustainable Development and the Addis Ababa Action Agenda. Nicolas Pinaud earmarked the Italian presidency of the G20’s actions into three main categories: people, planet and prosperity. These categories are then subdivided to follow either the Sherpa Track, focusing on social protection, new forms of work, urban reforestation and gender equality, or the Finance Track, focusing on productivity, digitalisation and sustainable finance.