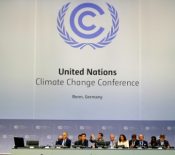 The Bridge Tank team was invited to attend the World Climate Summit, organized on the sidelines of the COP22 on Sunday, November 13th at the Palm Plaza Hotel in Marrakech.

The joint sponsors of the event were World Climate Ltd, the Kingdom of Morocco, and IRENA. This summit has been held annually since 2010, and serves as a forum to bring together companies, investors, international organizations, regions, and cities to share their experiences and solutions to climate change. It is a leading platform for the voice of non-state actors.

The opening ceremony of the event brought together top-level speakers to discuss the urgency of climate action: Yvo De Boer (former Executive Secretary of the UNFCCC), Hakima El Haite (Morocco’s Deputy Minister for the Environment), Adnan Z. Amin (CEO of IRENA), Miriem Bensalah-Chaqroun (President of the General Confederation of Corporations of Morocco) and Paul Polman (CEO of Unilever). Bertrand Piccard, pilot of the Solar Impulse aircraft, also gave an inspiring speech on the immense possibilities offered by technology. All of the panelists agreed that the dynamic of the Paris Agreement should include the private sector and territories in order to develop innovation and technology, and mobilize the necessary investment.

After the presentation of the report “The State of the Green Economy” by Mohammed Al Tayer, CEO of DEWA (Dubai Electricity and Water Authority), the first session highlighted the innovative low-carbon solutions that will allow us to transform industries and ecosystems. Lisa Davis (Siemens) spoke about the importance of technology and innovation for a successful low-carbon transformation, but also the need for an adequate regulatory and legislative framework. For Pierre Victoria (Director of Sustainable Development at Veolia), establishing a price on carbon (which Veolia has already done internally) is essential for the utilization of low-carbon solutions. Sonia Mezzour (Secretary General of ADEREE) insisted that energy efficiency is a sector that can generate employment and serve as an opportunity for the private sector. 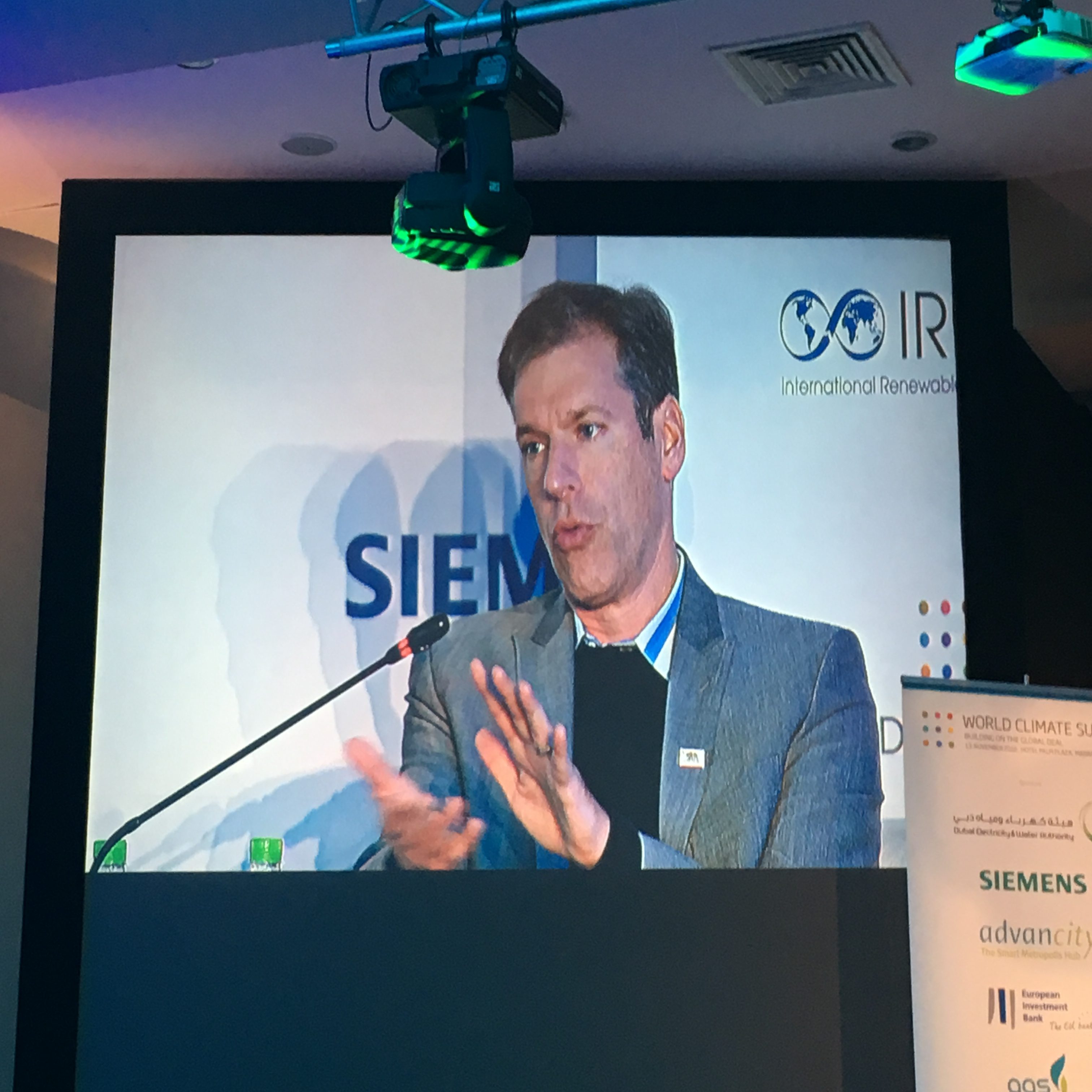 A second session was held to discuss the importance of partnerships and collaboration in the implementation of the NDCs, including financial tools and the importance of the involvement of multilateral development institutions for mitigating financial risks in the early stages of projects. Alain Ebobissé from Africa 50, an infrastructure fund owned by African governments gave the example of their work to encourage proactive engagement from the private sector and for taking early-stage risk : they finance partially projects at early stage to bring them to the financing stage.

The afternoon offered several parallel sessions that were smaller in size. The Bridge Tank attended the discussion on “decarbonisation” of the economy, which gathered among others Daniel Kammen (professor at Berkeley and Scientific Envoy to the U.S. State Department), Mustapha Bakkoury (CEO of Masen), and Marie Donnelly (of the European Commission). The latter spoke of the necessary energy transition across sectors (electricity, transport, industry, construction, heating and cooling) through the utilization of renewable energies. Daniel Kammen mentioned for example the fact that we often talk about electricity and transportation, but not enough about good and services, or storage technology for manufacturing. Marie Donnelly insisted on the importance of tackling energy efficiency of heating and cooling in our buildings that represent a major share of our final energy use in Europe. They also highlighted innovation and political support as two key levers in such a transition. We also attended the session on innovative financial models for developing green projects, where the large need for private sector investment was mentioned but also the various tools currently available (green bonds, public financing, pure-players, private equity, securitization, etc.). Panelists insisted on the necessity of an increasing commitment of the private sector, with the support of public and multilateral finance especially to mitigate risks. 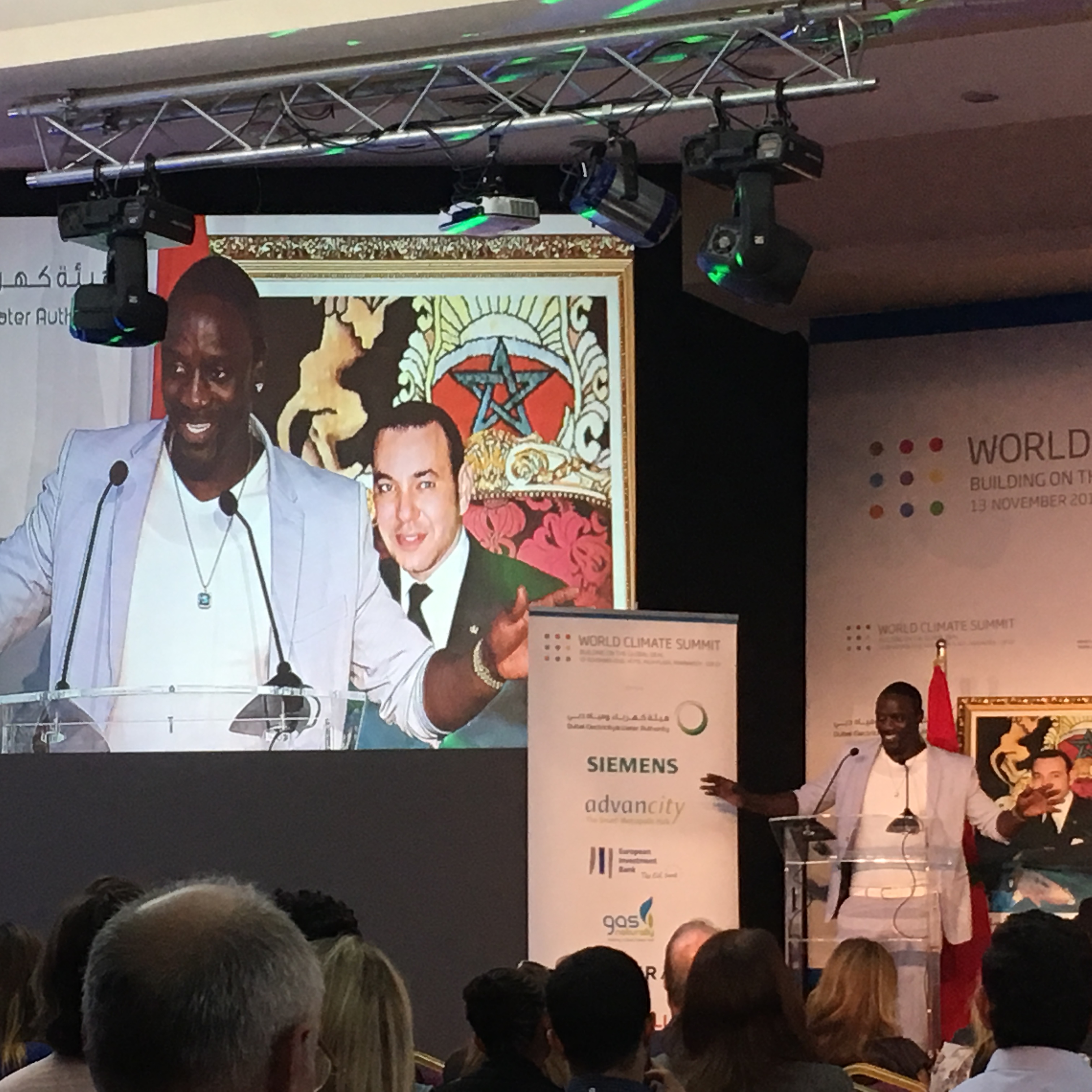 The day concluded with a speech by singer Akon, founder of the Akon Lighting Africa project, who insisted on an inclusive dimension to climate action: it is necessary to include populations and communities, and to push education in the fight against climate change.