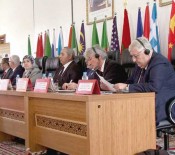 The 3rd Dakhla International Meeting, organized under the high patronage of King Mohammed VI, was held 3—4 December 2015 on the theme “New economic territories, actors and factors in emergence, comparative international experiences”. At this event, Joël Ruet, president of The Bridge Tank, foregrounded Morocco’s signals of emergence, be it industrial diversification or the enhancement of its natural capital.

Meeting in the southern Moroccan city of Dakhla, political experts and representatives spent two days discussing the emergence process now underway, and the ability of countries such as Morocco, Mexico, Turkey and Ethiopia to produce wealth and develop new growth with high value-added.

Speaking in the context of the Network for Foresight on the Morocco-France Partnership*, The Bridge Tank president Joël Ruet shared his analysis of Morocco’s economic, industrial, environmental and human potential. “I sincerely believe that the Kingdom is a case apart, much like Ethiopia further to the east, or Turkey, but it exhibits greater coherence and consistency than Turkey, which is facing growing political risks. My view is not just based on the densification of foreign direct investment, but rather on more deep-rooted signals, i.e. the way Morocco is orchestrating its four capital assets — technical, natural, human and social.“

It should be remembered that, with a 2—5% growth rate over the past five years and a public deficit down to 5.5% in 2013, Morocco’s economic situation is quite uncommon in Africa, and borders on that of other countries classified as emerging.

Yet, as Joël Ruet pointed out, emergence is more than just a series of numbers, and goes beyond a country’s ability to attract foreign investment. Each emergence process is unique, and stems from a combination of social modernization, a track record of clean industrial practices, and, at some stage, industrial globalization. And on these fronts, Morocco’s signals of emergence are growing stronger.

The first important signal, according to Joël Ruet, is that Morocco is diversifying. As he points out, “emergence involves more than development and is the opposite of specialization. It involves diversifying the processes related to industry, technology and economic ecosystems.” Citing the example of the automotive industry, he noted the commitment of all the stakeholders (regional authorities, banks, manufacturers…) in this sector, particularly the increased emphasis on training.

The second key signal, at a time when the use and processing of resources is at a global turning point, is that Morocco realized the sacrosanct nature of its natural capital very early in the day. The creation of regional environmental observatories, the Green Morocco Plan and large-scale solar projects show the Kingdom’s determination and, above all, its capacity to become a pioneer in the field — and why not an example for Africa to follow.

These strengths are also enhanced by human and technical assets, that is to say, a real thrust to develop know-how through win-win partnerships and a dynamic in the field of research. With all these, Morocco already has the profile of emergence. As was pointed out by Professor Driss Gerraoui — president of the Association for Studies and Research in Development, a member of the Foresight Network Morocco-France partnership —, all that now needs to be done is to take this further within the framework of a territorial organization based on 12 new regions. These regions are set to become development hubs capable of producing more fairly distributed wealth and creating local employment, while ensuring the sustainability of industrial and natural ecosystems.

*Since April 2015, The Bridge Tank has been a founding member of the Network for Foresight on the Morocco-France Partnership, along with the Economic Intelligence Academy, headed by Alain Juillet, the Association for Studies and Research in Development, headed by Driss Gerraoui, and the Francophone International Association for Competitive Intelligence, headed by Philippe Clerc.

This OpEd published on @diplocourier written by @JoelRuet explores potential solutions to the unsustainable debt problem in developing countries, a topic also discussed in our issue brief on financing the African economy. More on our website: https://thebridgetank.org/en/2021/10/14/oped-g20-must-help-low-income-countries-get-out-of-debt-crises/

#Mitigation, #adaptation, #finance and #collaboration. These are the four major global issues around which the @COP26, considered by some as one of the most urgent #COPs yet, is structured.

This OpEd published on @diplocourier written by @JoelRuet explores potential solutions to the unsustainable debt problem in developing countries, a topic also discussed in our issue brief on financing the African economy. More on our website: https://thebridgetank.org/en/2021/10/14/oped-g20-must-help-low-income-countries-get-out-of-debt-crises/

With less than two weeks to go until the @COP26
in #Glasgow begins, here's what you need to know:

#Mitigation, #adaptation, #finance and #collaboration. These are the four major global issues around which the @COP26, considered by some as one of the most urgent #COPs yet, is structured.