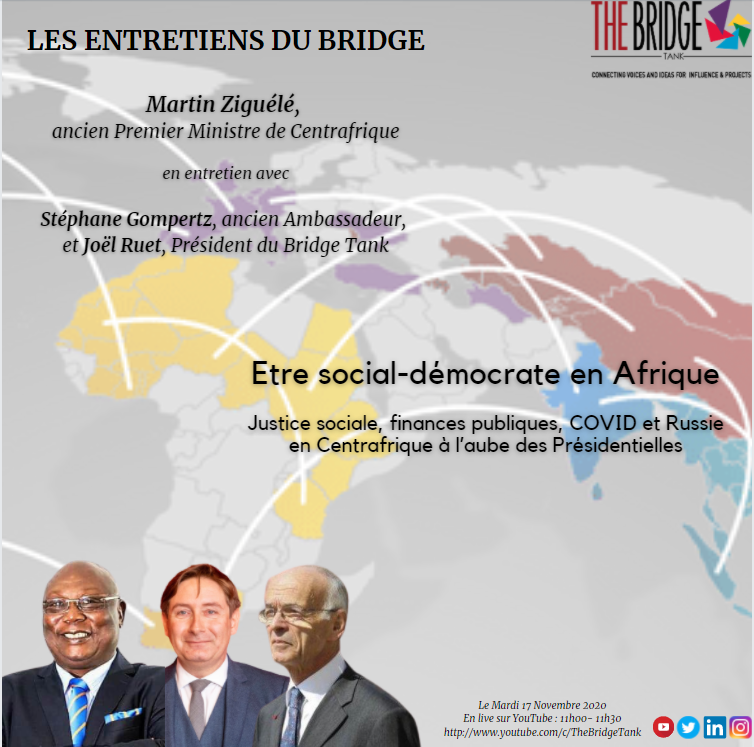 Martin Ziguélé, former Prime Minister of the Central African Republic, took part in the Bridge Tank’s conversation about being social democrat in Africa. He discussed with Joël Ruet and Stéphane Gompertz, former French Ambassador to Austria and Ethiopia and Africa Director at the Quai d’Orsay, about various subjects, including social justice, public finances, COVID-19 and Russia. Martin Ziguélé highlighted his political and financial experiences and how these would be an advantage to run for the presidency. He also underlined how important the fight against corruption was to him. He also mentioned the need for his country to develop and invest in education, especially after higher education, as well as secure the possession of fire weapons. Martin Ziguélé also called for more communication between African states, so that the voices of smaller or less economically developed countries can still be heard. He eventually called for the respect of the rule limiting the number of presidential mandates in other African states. This talk took place on the 17th of November 2020.

Yes but not for everyone all over the world. No one of us will be safe until all of us are safe. This is unfortunately the sad news #HealthAndSafety https://twitter.com/JSABuilder/status/1383886588258570245

Proposed rails: by whom? China officially endorsed map or generated by someone else? Without this information it’s difficult to read through

Make Space for the #BeltandRoad in the Americas