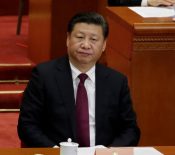 Chinese President Xi Jinping has presented to twenty-nine heads of state and government “a project for the next century that will benefit the world” at a Forum on “The New Silk Roads” which has just ended in Beijing on 14 and 15 May.

Joël Ruet explained this new investment policy by highlighting the need for the Chinese government to move its economy in two ways:

– First internally in China, as investments will move from coastal cities to western provinces.

To co-ordinate these two visions, the Chinese government has put in place a large geostrategic vision of a continuum between the historically developed coastal areas, the inland provinces, the western provinces in China, the neighboring countries and by extension all foreign countries.

Joël Ruet also says that China through this Silk Road intends to revive its growth and at the same time extend its influence. The growth drivers of coastal China ran out of steam ten years ago. It is therefore necessary to seek opportunities abroad with a desire to strengthen ties and to move faster in geostrategic cooperation.

China’s position in Africa is therefore coherent with this new extension of the Silk Road. Through investment in infrastructure, especially railways, China is deploying its expertise and resources to shorten delivery time.

Therefore, the competition, in which China is engaged in the quest for markets for its capital, offers a new geo-strategic rebalancing. This allows host countries to gain from the flexibility of contracts provided by China. Previously, the contracts were much more unequal with the condition of “raw materials against infrastructures”. Today, China balances these contracts more fairly and takes into account the specificities of the countries in its vision of broad-based and in-depth cooperation.

“Globalization has accelerated as a result of trade, but it cannot grow indefinitely. Today we are facing a slowdown in growth and trade; we must ask ourselves what are the next frontiers of globalization. Many reflections in the G20 have led to the conclusion that investment is increasingly taking over from trade. China is also working on international standards in order to align all of its investments,” says Joel Ruet.

Thus, China is trying to reshape globalization by investing through: 1 / physical projects, and 2 / taking a position in the international system.

1 / Regarding the projects that China is developing, the Silk Road is the vector for the implementation of these projects.

2 / Its position in the international system is manifested through China’s ambition to accompany investments through the Asian Infrastructure Investment Bank (AIIB), where 77 countries are financially contributing. China also intends to reshape the financial system, as the entry of the Yuan into IMF special drawing rights is a first step.

China is progressing in a coherent way with a clear vision combining development of the Chinese economy, internationalization and remodeling of the international financial system. Therefore, the European Union is very attentive to this policy of “silk road”, since China is constantly trying to negotiate bilateral relations with the EU members. It thus is trying to centralize the debate for more structured negotiations.

India, for its part, has had a varied position over recent years in relation to Chinese investments, as there is some protectionism and concern over the telecommunications’ sectors. India observes the Chinese advances, and tries to position itself in Africa. The Prime Minister has revived, for example, an ancient tradition of dialogue between India and Africa. That said, India still has difficulty in positioning itself in this continent, which looks at Chinese investments with a much more benign eye than Western observers are willing to imagine.

The world’s largest vaccine drive has just been launched by PM @narendramodi. In first phase, we will vaccinate 300 Mn citizens - that’s almost the population of USA & greater than populations of UK, France, Germany & Italy put together! Totally historic & unprecedented!

Donald Trump has been a shield, since January 2017

A forensic physician has been labelled a "terrorist" by Recep Tayyip Erdogan for investigating the government's under-reporting of covid-19 case numbers in Turkey https://econ.st/3oO77Mm

Honored to be joining ⁦@JoeBiden⁩’s National Security Council as Senior Director for China. Humbled by the enormity of the task and privileged to once again serve the American people alongside an incredible team. https://buildbackbetter.gov/nominees-and-appointees/white-house-personnel/

gives producing nations & energy companies a glimpse of what is to come.

The answer is to make emissions abatement a standard component for developing new gasfields.
https://on.ft.com/3smxP0B