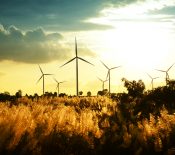 This report details the discussions and conclusions at the LESC conference from November 14th to 16th as part of the COP22 in Marrakesh. The report is meant to be a collection of data, quotes, and viewpoints put forth by the speakers and panelists over this three-day period. In addition, we have added our own analysis and evaluation throughout the document, which is meant to help connect the different ideas presented. The LESC conference was intended as a workshop over solutions to reach the objectives of the Paris Agreement. It was thus action-oriented, with panel discussions intermixed with presentations on different innovations potentially critical in reaching said goals. As this was the COP of “action”, this was an appropriate format, and should provide policymakers with plenty of options in planning their own pathways to drastically lower emissions.

The conference was spread among three days. The first day was dedicated to presenting major initiatives that came out of the COP21 in Paris, at different levels of government and within the private sector. The second day focused on a variety of specific subjects, identifying progress and remaining bottlenecks within each: municipal governments, construction, transport and fuels, and freight and shipping. The third day was similar to the second, with focuses on the clean energy transition, smart grids, carbon capture and storage, agriculture, and policies. Each panel hosted a mix of policymakers, engineers and scientists, and representatives from the private sector and civil society.

Across all of the different panels and events, several themes stood out. The first is that although the Paris Agreement was a big step for governments to take in declaring their commitment to fighting climate change, the bulk of the work remains in trying to figure out how we can practically do this. The second is that several pathways do exist for countries to take in reaching those objectives. The third takeaway is that data and technology have a large role to play in promoting and enabling climate action, and policies must be constructed that support and encourage present and future innovations. The fourth major conclusion is that even in the absence of national-level government action, subnational governments, businesses, and civil society continue to progress on climate action. The fifth and final main theme is that there is no single solution that exists for countries to adopt. Instead, plans and solutions should reflect local conditions and resources available. These major conclusions tied the different panels together, are showing that across sectors, countries, and industries, there is a great willingness and capacity to take action on climate change now.

The Bridge Tankʼs “take away message” is that it is now time for fine-tuned policies and for increased coordination of initiatives.