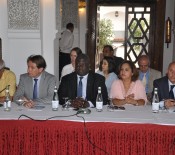 The Business Dialogue under the theme “Water and Climate Change” organized by the CGEM (General Confederation of Moroccan Companies) took place in Tangier on July 17. Joel Ruet, chairman of The Bridge Tank, was invited to join the prestigious panel of this event alongside stakeholders working in on water issues from both the public and private sectors.

The Bridge Tank was the only international think-tank that participated in this event. Among the other important participants were Ambassador Aziz Mekouar, responsible for the negotiations of COP 22, Fathallah Sijilmassi, president of the Union for the Mediterranean, and Meriem Bensalah-Chaqroun, president of the CGEM.

The Business Dialogue was launched in the context of preparing for COP21, and regularly brings together representatives of the private sector and governments to promote partnerships and debates.

The CGEM is organizing three meetings as part of the preparation of COP22 this year in Morocco. The meeting in Tangier gave special emphasis to the crucial topic of water, a particularly vulnerable resource today. The objective of the round table was to share strategies and approaches to limit the impact of global warming on this vital resource. Different topics were discussed, including the following questions: What are current perspectives for the water sector when addressing global warming and its effects? How does this apply to the African continent specifically? How can the private sector be involved in limiting and adapting to this challenge? How can we as an international community facilitate access to climate financing?

The Bridge Tank released several recommendations on environmental engineering. The meeting also led to the development of concrete recommendations from the private sector for COP22 negotiators.

The world’s largest vaccine drive has just been launched by PM @narendramodi. In first phase, we will vaccinate 300 Mn citizens - that’s almost the population of USA & greater than populations of UK, France, Germany & Italy put together! Totally historic & unprecedented!

Donald Trump has been a shield, since January 2017

A forensic physician has been labelled a "terrorist" by Recep Tayyip Erdogan for investigating the government's under-reporting of covid-19 case numbers in Turkey https://econ.st/3oO77Mm

Honored to be joining ⁦@JoeBiden⁩’s National Security Council as Senior Director for China. Humbled by the enormity of the task and privileged to once again serve the American people alongside an incredible team. https://buildbackbetter.gov/nominees-and-appointees/white-house-personnel/

gives producing nations & energy companies a glimpse of what is to come.

The answer is to make emissions abatement a standard component for developing new gasfields.
https://on.ft.com/3smxP0B