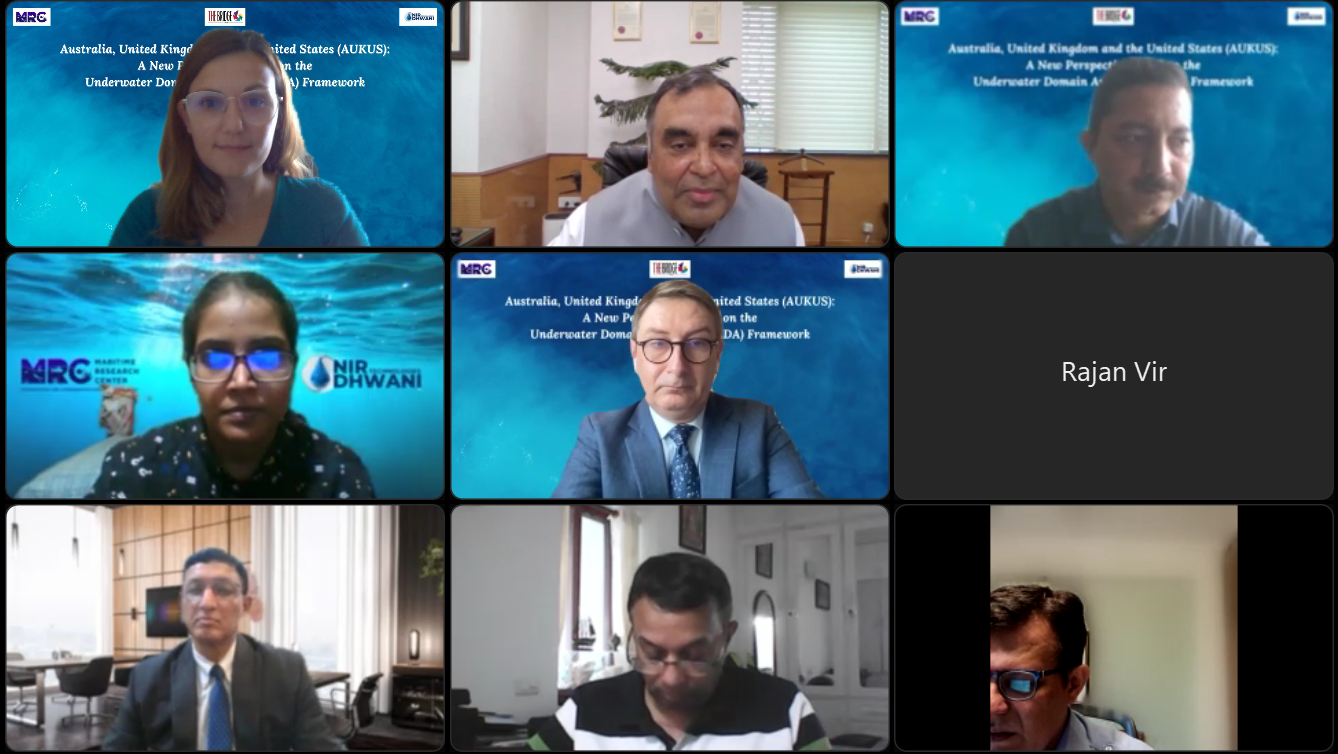 On June 30th, The Bridge Tank and the Maritime Research Center (MRC) co-organized a webinar titled “Australia, United Kingdom and United States (AUKUS): A New Perspective based on the Underwater Domain Awareness (UDA) Framework”. This event aimed at bringing together the defense industry, maritime strategists, policy makers and others, to be able to reach out and build policy priority for the UDA framework both at the national and regional level. The interactions sought to strengthen the User-Industry-Academic partnership and encourage joint acoustic capacity and capability building at the national and regional level.

The importance of this webinar was to discuss the strategic, military and even political evolution of AUKUS 9 months after the creation of this alliance and also how the UDA framework can contribute? The event was planned to entail the participants’ point of view and shared their experiences about the policy issues, technological means, innovative tools and measures, geopolitics, geoeconomics, organizations aspects both nationally and globally. 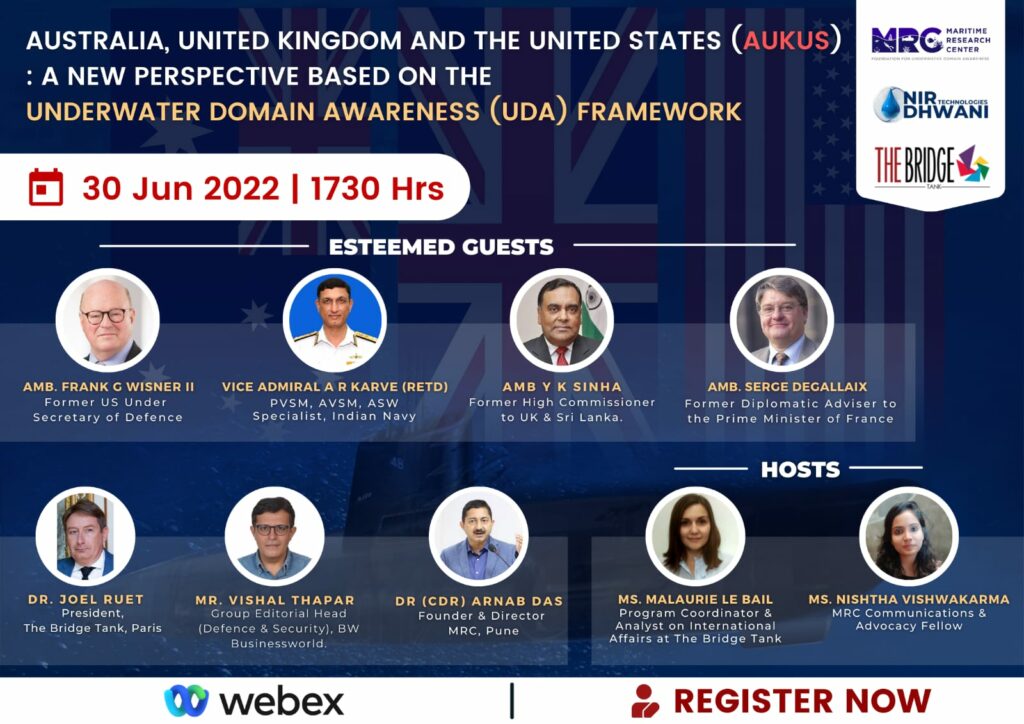 First, the Amb Y K Sinha is an Indian diplomat who belongs to the Indian Foreign Services and is the former High Commissioner to UK & Sri Lanka. After retiring from foreign services, he was first appointed as Central Information Commissioner on 1 January 2019 and was subsequently sworn in as the Chief Information Commissioner of India on 7 November 2020. He opened the webinar by giving an overview of the geopolitical context in the new global order. He highlighted that the security aspect is prominent and it is important to consider it in order to avoid any ripple effect in every sectors. He also mentioned that India is ready to provide support to neighborhood.

Secondly, Dr (Cdr) Arnab Das is an ex Naval officer with 2 decades of active services and PhD holder from Indian Institute of Technology (IIT) Delhi with specialization in Underwater Acoustics. He has worked on several projects and has a plethora of publications to his credit. Dr Das is the author of a book titled “Marine Eco-concern and its Impact on the Indian Maritime Strategy”, which was supported by the Indian Maritime Foundation and was published in February 2017. He insisted on that fact that the UDA is particularly meaningful given the AUKUS alliance has a strong submarine dimension. Geopolitical evolution and crises remind us of UDA importance. The underwater domain, or even, the maritime domain awareness is rarely debated in international discussions.

Thirdly, Vice Admiral A R Karve is a retired Indian Navy Vice Admiral. Param Vishisht Seva Medal (PVSM) and Ati Vishisht Seva Medal (AVSM) were awarded to Vice Admiral AR Karve. He last served as the 27th Flag Officer Commanding-in-Chief Southern Naval Command. His presentation highlighted the strategic aspects of the region. He has highlighted the need to ensure stability in the region face to the expansion of the Chinese maritime influence, in particular the expansion of Chinese submarines. He has also emphasized that several initiatives and tools exist to ensure stability, but that more needs to be done, notably concerning the UDA. He concluded by saying that the AUKUS and the QUAD can contribute to maritime stability and promote the UDA.

Fourth, Mr. Vishal Thapar is the Group Editorial Head at Businessworld. He was formerly associated with Hindustan Times, and prominent news channels CNN-IBN and NewsX. He is the founder-editor of armingindia.com, India’s first portal on the business and politics of India’s defense trade. He gave an analysis of the international agenda, of the solutions to be put forward, particularly in terms of technology, but also, of the Chinese context in the region.

Last but not least, Dr. Joël Ruet, President of The Bridge Tank, concluded the webinar by developing a series of open questions to be raised in further webinars or close door discussions, insisting on identifying the right format to dialogue and the importance of technology to be rethought. 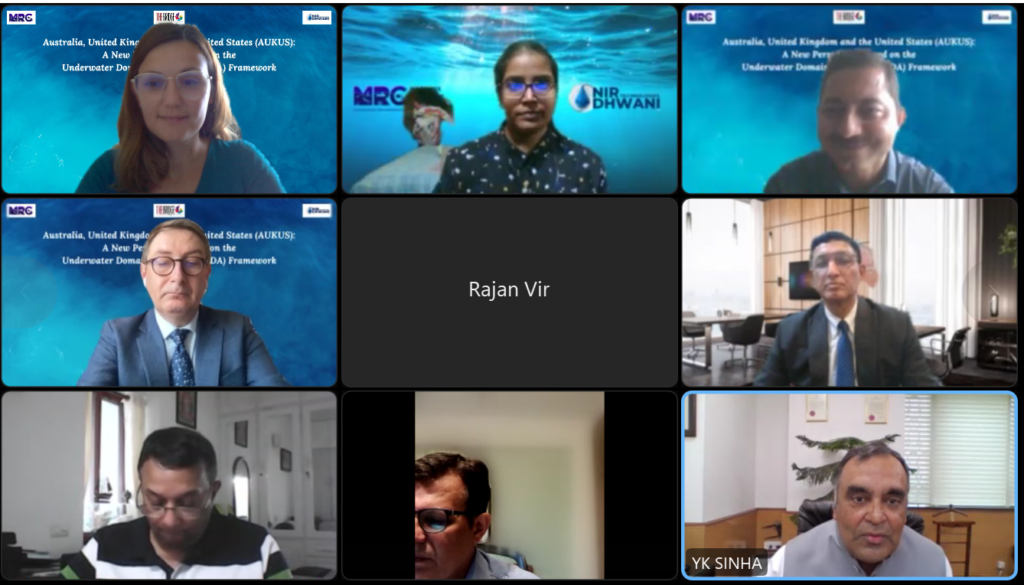 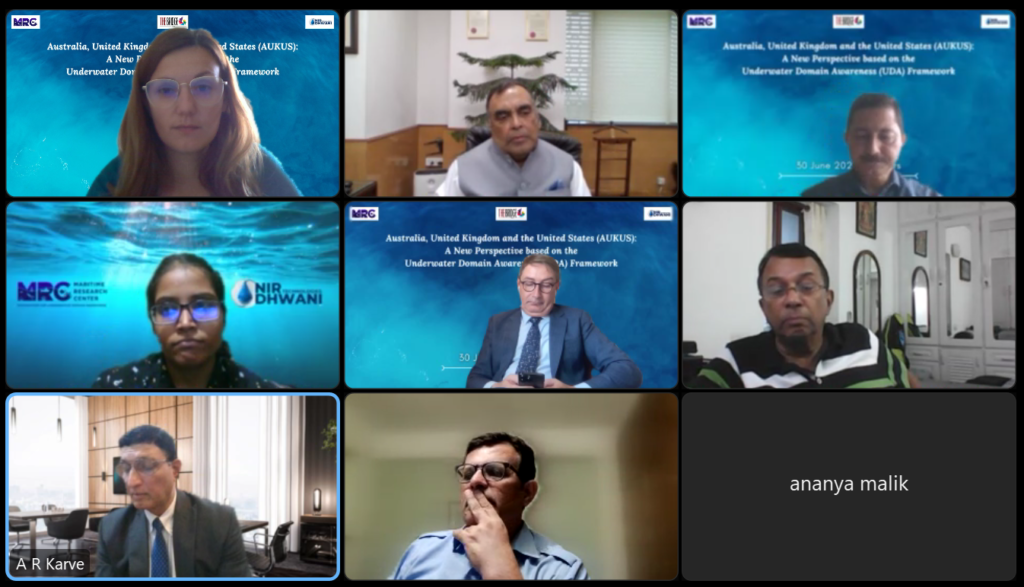 This webinar was conducted by Ms. Malaurie Le Bail, Analyst and program coordinator at The Bridge Tank, in the continuity of the project on the blue economy in the Bay of Bengal. This event was another opportunity to keep the dialogue going on maritime issues and on the Indo-Pacific with the MRC.

This webinar was very comprehensive and educational with high quality exchanges. All the panelists agreed on the fact that the MRC is playing a great role in pushing the concept of UDA.

Please find here the concept note of the webinar for more details.