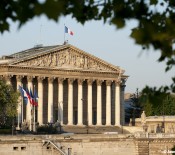 Joel Ruet mentioned Morocco’s role of model for the South as The Bridge Tank had the opportunity to take part in the France-Morocco Meeting on July 5, collectively organized by the France-Morocco group of the French National Assembly and the Morocco-France group from the Moroccan House of Representatives. The event was focused on the theme “Morocco’s Reform Agenda: A Bulwark Against Instability”.

The event took place in the French National Assembly in Paris. A succession of round table discussions allowed the speakers to debate ongoing reforms and changes in the kingdom regarding human rights, civil rights, the model of development, and the place of the religious field in the polity. The meeting was attended by a diverse panel of speakers: French and Moroccan Ministers and Members of Parliament, senior officials, journalists, and researchers. Mr. Luc Chatel, President of the France-Morocco group, introduced the event, along with Ms Aatimad Zahidi, President of the Morocco-France group and Mr. Chakib Benmoussa, the Ambassador of Morocco to France.

Joel Ruet, chairman of The Bridge Tank, gave a talk during the round table titled “Towards a More sustainable and Inclusive Development Model”. The main theme revolved around the transformation of Morocco’s economic structure through numerous investments that have supported economic growth. But the task today, according to Ruet, is to ensure a durable and inclusive growth regime, especially in the context of strong commitments on climate change from Morocco. The Bridge Tank closely monitors new and inclusive growth patterns in Africa.