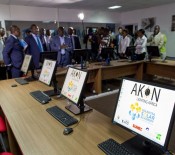 A few days before the COP21, Fanny Costes, The Bridge Tank General Secretary, talked with American RnB singer Akon about Akon Lighting Africa initiative: a solar power project partnered by Samba Bathily, the CEO of Solektra International, and Thione Niang, the founder of Give One project.

For Akon, a native of Senegal, clean energy is the ideal solution for the electrification of Africa and for its economic and environmental development. To make this happen, Africa has to take on responsibility for this enormous project, training its people and relying on its young leaders to deploy it.

What led you to become involved in a project for solar energy deployment in Africa?

The main reason I contributed to this project was because it provides electricity to rural areas, which today are those that most lack energy. In these remote areas, where the population is scattered, it is extremely difficult to extend the power network. From a business viewpoint, it makes no sense for the government to spend two or three hundred million dollars to take the network to a village. Given this context, we concluded that solar energy was the best solution, as it doesn’t require large-scale infrastructure to supply electricity. And in Africa, there is no shortage of sun. As I see it, it was an opportunity to change the situation.

You are a singer and producer. Why electrification in Africa?

That’s true, but there are two reasons for this choice. One, as a businessman and investor, I see potential profits. But above all, I think that African electrification needs to happen. It’s the sort of idea that gradually grows in your mind, especially when you don’t see anything changing for so many years. Africa is a part of me. I was born and lived near Dakar. When I left for the United States, there was no electricity or running water, and when I came back to Dakar after making a success of my music, the situation was exactly the same. And my family and friends continue to live there. I was a little riled at not being able to take a good shower but, more than that, I realized that the local residents are also deprived of a general level of comfort that goes far beyond tiny material things.

Why is it good business? What can you bring with this?

One thing I know about business in general is that where there’s a need, there you can make money. A place like Africa, where over 80% of the population doesn’t have electricity, common sense says that it’s a billion-dollar business! But apart from this, personally, I want to get into a business where I feel I can contribute something; for me, music is like social entrepreneurship because it’s used for education, birthday, funerals, graduations… You can start a healing process for people. It helps people, apart from the fact that you make money with it. Providing people with electricity is much the same as playing music. It changes their life.

What can green electricity bring to Africa, for its future development?

I think that green electricity is definitely the best way forward for Africa. And I’m not only talking about solar power. There are so many ways of generating energy, with hydropower or nuclear plants for instance, without polluting the air. What’s more, I think that now is the time for Africa to place its bets, as the clean-energy market is taking off and we can learn from the mistakes made by the developed countries. Because, now, the main challenge is to mainstream the energy solution into the local environment.

What are the next steps of your project?

Late 2015, we launched the Solar Academy in Mali, Bamako, which is intended be a tool to train the younger generation on renewable energies. First, we identified youngsters with a basic knowledge of solar power and their teachers will be real technicians and real engineers.

For 2016, the idea is to set up partnerships with universities around the world to bring more experience and knowledge into the Academy and develop a high-quality technical program. We also plan to work with financial institutions such as the Africa Development Bank to develop synergies on the continent. If the bankers buy in, this means we will have a local partner and a guarantee for them.

What do you think of the announcement of two billion euros made available by the French President to develop renewable energy in Africa?

In my opinion, the French who come to Africa have a very big responsibility, because they have interfered with African culture for hundreds of years. But for me, it’s great news that they want to help create the first steps in a process of construction.

And then, more can always be done. At the same time, the main responsibility lies with African people to build their own “home”. Getting help is important of course, but African people and entrepreneurs must realize what is at stake and become part of this venture.

So African people should create opportunities for themselves?

Exactly. Africa did not build France; it was the French who built it. France did not build the United States; it was the Americans who built the country. So it makes sense for African people to build their future. If you look at China, the case is very compelling. It was in a position similar to Africa’s twenty years ago. But China leveraged its available resources and has gradually upgraded the skills of its people. Africa needs to rely on the same concept: identify the resources that will benefit each country and empower people mainly through education.

In this context, do African politicians have a heavy responsibility?

Yes, definitely. The biggest responsibility in Africa lies with politicians because they are the ones who can make decisions that will make a difference. So, if politicians are uneducated or act outside the field of development, it is clearly very difficult for Africa to grow. Well-trained young leaders who grasp the challenges of this century and know how to create economic and social opportunities could make a difference. When you have a trained and empowered population, you can create economic growth through these people, as they will be in a position to act and become entrepreneurs.

You met a lot of young people in Africa during your “tour.” Do you think that African youth is ready and motivated to embrace development through clean technologies or energies?

Absolutely. I even think that the young generation understands this need more than the older generations, because our lives are full of these new technologies and Internet. We understand better what the future is about.

When we arrived with our solar project four years ago, the older leaders said: “Oh, you know we’re building a new pipeline!”

Today, the vast majority of African countries are more stable, and leaders are more focused on the future. Fortunately things are moving. The old leaders are beginning to understand,. And we need young minds to say and say again that it is up to them, up to the Africans, to build their country and create tangible economic benefits.