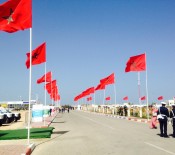 The Crans Montana Forum, held in Dakhla, Morocco, from 17 to 22 March, was an opportunity for attendees to discuss South-South cooperation in Africa. They addressed the issue of African food security in a world that will have to feed 9 billion people by 2050. At the Forum, Bridge Tank’s president exploded the myth of insufficient production in Africa as being “incorrect, counterproductive and ultimately dangerous” for the effectiveness of public policies.

He went on to advocate the diversification of local ecosystems, which could foster regular rural incomes and the modernization of African agriculture.

“Africa, Sub-Saharan Africa included, produces overall enough to feed its local populations. The problem is not production, but rather distributing and getting out food that is often wasted during its storage, processing, in its distribution centers, in its transport,” Joël Ruet argued during a round table on food security.

The belief that food insecurity is synonymous with insufficient production is wrong; poor food-producing farmers are the first to suffer from malnutrition as they lack economic outlets and thus have no regular income. Laying the blame on production rather than the end market has led and still leads to counterproductive “siloed” policies for agricultural support and development, according to Bridge Tank’s president. These policies do not allow investments to be well targeted, particularly at the local level, nor do they promote the modernization of African agriculture, which needs to enter the world market. In fact, these policies perpetuate the cycle of food insecurity.

”Take, for example, Burkina Faso, where 96% of the population are food-producers. The problem for a typical household in Burkina Faso is to bring in a regular income. If it is to have a regular income, all that this food-producing household needs are customers. These customers won’t necessarily be in Asia, Europe or the United States, and perhaps not even in other ECOWAS countries. They may simply be in neighboring villages or their own village. How? It’s simple. The household needs to diversify its production and crop cycles. When you diversify your production, you not only begin to diversify revenue streams and their time cycles, but you also create a sort of insurance policy against unforeseen natural events. All of these fairly inexpensive and virtuous investments are impeded or underestimated when simplistic analyses claim that ‘we don’t produce enough’,” he cautioned.

He went on to present possible examples of the diversification and modernization of African agriculture, such as the agro-pastoral model or the development of a bioenergy value chain using animal or plant waste. Joël Ruet urged the stakeholders not to confuse “on the one hand, a completely globalized chain focused on producing a standardized bio-ethanol – thus a ‘commodity,’- and on the other, developing for example a local chain of biogas or bio-electricity production” that creates jobs and human capital.

Later came a debate notably with Swami Agnivesh, an Indian politician who received the 2004 Right Livelihood Award or “Alternative Nobel Prize”. Fiercely opposed to an overly meat-based diet for the world, Swami Agnivesh is against developing agro-pastoral models in Africa that focus on meat production (and not just milk) to reduce food insecurity, putting forward the argument of the sector’s global CO2 emissions. Joël Ruet’s position was that a “global problem cannot impose a solution at the local level.” The world’s meat production mainly comes from industrialized production geared for global exports from areas without malnutrition – so this is clearly, again, the production of a “commodity”. However, the problem in most of Africa is different: here, the issue is not one of having an overly meat-based diet, unlike in Europe, for example. The problem is rather being able to create local market opportunities and links within rural economic ecosystems.

These exchanges were fruitful. And The Bridge Tank is particularly involved in a food and agriculture debate in which South countries must make themselves heard. They need to show that, despite this huge challenge, they are finding opportunities to showcase innovative, localized and inclusive solutions.