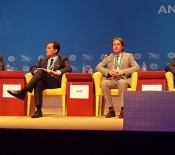 At the 2015 MEDays Forum in Tangier, Morocco, The Bridge Tank’s president, Joël Ruet, commented that inclusive development starts from the bottom up, driven by the grassroots dynamism of people determined to act. However, although it is impossible to impose any kind of model on the world — particularly in the Global South — nothing will happen unless the elites act with utmost integrity and assume their responsibility to create the conditions that foster the proactive initiatives of their national youth and entrepreneurs.

“Inclusive development starts from the bottom up. It is created by young people’s dynamism and it is up to decision-makers and elected officials to create the conditions enabling access to energy, information and training,” Joël Ruet remarked at the MEDays Forum, during the opening of the round table “Emerging Economies Outlook: Modeling an Inclusive and Sustainable Growth.”

Together with former French Minister Eric Besson, Karim Helal, president of the Asia-Egypt Business Association, and Alexei Vasiliev, a foreign policy adviser to the Russian President, Joël Ruet discussed the prerequisites for inclusive growth, as well as the first promising examples in this area.

Citing the success of the “Million Baht Village Fund” poverty reduction project in Thailand, the Rwandan “One Cow Per Poor Family” program and the 3N program “Nigeriens feed Nigeriens” in Niger, he stressed that, while there is no single simple recipe, there are indeed some compelling examples.

“Each country needs to find its own model. But the main cornerstones — energy, infrastructure, sustainable financing and respect for the environment — are vital.”

He went on to point out that “economic densification is also critical. We have to realize that Africa covers a vast area (ten times larger than India, for example). Even if Africa had 2 billion inhabitants, the population density would still be about eight times lower than that of India with its soon-to-be 1.5 billion inhabitants. Densifying local economies in Africa will create tomorrow’s local markets. Of course, African countries have to connect with the rest of the world and develop balanced trade relations — but the creation of local markets can help generate a huge number of jobs,” which would thus promote inclusive development on the African continent.

Responding to the concerns expressed by some about Chinese projects in Africa, Joël Ruet was keen to clarify the debate: “One of the major changes that China has made to globalization is that it has lifted a large fraction of global trade off the market through long-term contracts. We are well aware of the problem of asset transfers at very low prices, but on that point, I would again mention the responsibility of the African elites, governments and civil society, and the need for integrity that we referred to earlier. However, let’s not forget that a long-term asset transfer contract is also a means of stabilizing prices. So it is oversimplifying things to incriminate American- or Western-style globalization for its fluctuating prices, on the one hand, — here I’m schematizing — and Chinese-style globalization for its fixed prices, on the other hand — to put it even more simply.”

Here, The Bridge Tank president is implying that partnerships with emerging countries may be an effective way of stabilizing the well-known fluctuations that negatively impact States and regions wishing to develop. Long-term contracts can provide the time needed to implement solid industrialization and infrastructure strategies.

As for the contradiction between the need to integrate environmental stakes and the need for massive growth in the Global South, Joël Ruet concluded that this concern makes no sense, as long as developing countries focus on “resilient national and regional strategies that pave the way for building and accumulating human capital, social capital and natural capital.”

To watch the debate: https://www.youtube.com/watch?v=wI2NNLQvZX4&sns=tw