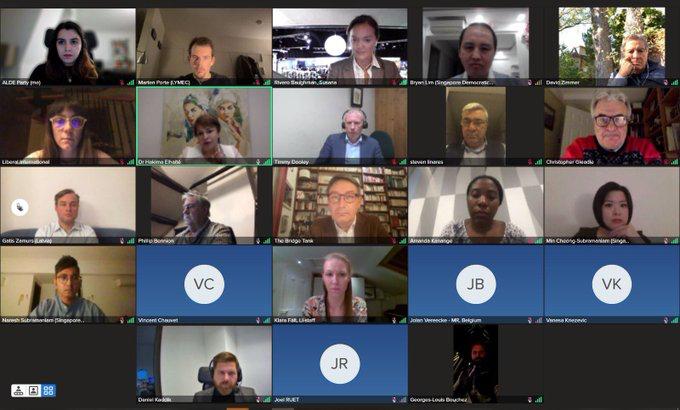 8 November 2021, The Bridge Tank participated to an online roundtable event on the fringes of COP26, hosted by ALDE Party and Liberal International.  Liberal policymakers and representatives from partner organisations gathered together to share their views and exchange information on the ongoing United Nations Conference on Climate Change to align common aims. The event was chaired by ALDE Party acting co-President Timmy Dooley and President of Liberal International Hakima El Haité.

The participants discussed the role of liberals when it comes to influencing the sustainability agenda in the next years, with a particular look at the first week of negotiations and an eye towards the second and final round of negotiations. Moreover, they also stressed the importance of the liberal voice, including younger generations, when it comes to building back better from the pandemic and generating jobs and growth as well as for the respect of rule of law across the globe.

At the end of the roundtable, the participants adopted a liberal pledge calling on states to increase their climate ambitions. In this pledge, the participants called for stronger international cooperation to raise climate commitments and implement them, called on states to submit more ambitious NDCs, and urged for more technical and financial support to be granted to developing states to improve their capacity to take climate action.

“Protection of global biodiversity is also essential to combat environmental degradation and climate change. Our planet is currently facing its sixth mass extinction as a consequence of human activity, and it is disrupting ecosystems around the world, threatening our food production, and increasing risks of pandemics. We must take bold and rapid action now to change this, and therefore call on states to include biodiversity protection as a central part in their climate action plans.

The time for talk is now over – the only option left is action.”